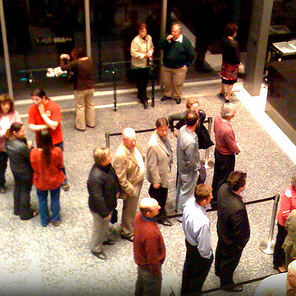 My friend Danielle has a five-year-old-son. One day he came home from kindergarten, and Danielle asked what he learned. “We learned not to talk to strangers,” he said. “Because strangers are bad.”

“Really?” Danielle said. “Do you think strangers are bad?”

Her son thought about it and wasn’t sure.

“You can tell when you see someone in the city that you shouldn’t talk to,” she told him. “But most people are good, whether they’re strangers or not. The next time you hear that lesson, just ignore it.”

Danielle is a fairly unconventional parent, so she has no problem telling her son to ignore his teachers. And I think she’s right—why teach children to be afraid? Most people are good.

Another friend, Elizabeth, helped her six-year-old Grace make a Twitter account. A lot of people asked her why she would do that—aren’t you worried? Aren’t you afraid? But Elizabeth (and Grace) knows that most people are good.

Here’s a sample selection of Grace’s tweets; I hope she gets a book deal:

“If I were a grownup and was sick like this, I’d say the f word.”

“Mulan is very brave. I don’t know if people are brave like that in real life. Maybe Santa Claus.”

I like stories like these because they go against the prevailing wisdom that people are untrustworthy unless proven otherwise. But as Danielle told her son, shouldn’t it really be the other way around?

There may be some comfort in closing yourself off and being afraid, failing to trust until someone proves themselves trustworthy. Perhaps it’s the safer choice. But when you choose to believe that people are good by default, you might find that most of them actually are.

On a related subject, I heard Tim Sanders speak recently and he said: “Giving is a wonder drug. You are only alive in the moment of giving and sharing.”

Why not treat everyone with respect unless they show they don’t deserve it? It’s a numbers game. You can win it by giving the benefit of the doubt, and sharing your belief in humanity.

Question: When has a stranger been good to you?

Breathing Just a Little and Calling It a Life