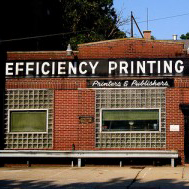 Visiting every country in the world is getting difficult. I’ve almost completely ran out of “easy” countries. These days I spend as much time arranging visas as I do planning the actual trip. It takes time, energy, and money: even with my best travel hacking strategies, I expect the overall cost to increase in the final two years of the project.

The Unconventional Book Tour is also inefficient. When I first asked my publisher about doing a book tour, I was told “No one is going on tour anymore.” I could come to New York if I wanted, but otherwise I was on my own.

That’s when I decided to put together our own book tour to every U.S. state and Canadian province, regardless of whether it was “worth it” in a strict economic sense. It’s been fun to have big groups in major cities…. but this week I’ve also been in Fargo and Sioux Falls. (No offense to the good people of North and South Dakota.) Part of the message of the book tour is that those places are “worth it” too, but it would be hard to argue this on an economic basis.

Someone asked a while back, “Why not do an online book tour?” Well, I do that already—that’s kind of my daily life. An online tour might be efficient, but it isn’t really that exciting. It’s exciting (at least to me) to go city-by-city, not leaving out any state or province. I do interviews with a.m. radio stations that have tiny audiences the same way I do interviews for blogs with 15 readers. Again, it’s not really efficient, but when you’re trying to craft a story, the small steps are just as important as the big ones.

This illustrates the third part of The Agenda: efficiency is overrated. Don’t worry about trying to live the most efficient life or become the most optimal human. Instead, embrace life as a meaningful adventure. Pursue adventure and passion instead of efficiency.

I love projects that illustrate the pursuit of meaningful adventure: Thomas’s One Million Photos, Nate’s walk across America, Robyn’s 10,000 hand-knits, Drew’s volunteering in 48 states, another Nate’s changing the world in 15 minutes a week, and anyone else living a big dream that requires sacrifice and the possibility of failure.

How Do You Find Your Adventure?

If you accept the premise that adventure is superior to efficiency, you may wonder how to find your own adventure. I have two suggestions:

1. First, think about what excites you and what challenges you. Is there something you wanted to do when you were younger, but decided to do something “more practical” instead? If time and money were no object, what would you do tomorrow, next week, and next year? As mentioned in Part II of this series, not everything you do has to make sense to anyone else. Your adventure is your adventure, not someone else’s.

2. Second, learn to embrace change. In the AONC book I wrote about Allan Bacon, a self-described “traditional guy” with a family and regular job. Allan was happy with some aspects of his life, but didn’t feel challenged enough in others. He started with a series of “Life Experiments” where he went to the art museum during his lunch break, took up photography, and gradually began doing more and more new things. He eventually took his family to Paris and started a consulting practice, a process he traced to the original Life Experiments and the desire for change.

In learning to embrace change, we create the possibility of adventure. Part of adventure involves letting go of the attempt to live the most optimal life. Instead, do whatever you can to live the most meaningful life. If more people did this, I think the world would be a better place.

This completes Part IV of The Agenda. I just finished up a long run of the Midwest and Great Lakes. Next week, I’ll head back out to the eastern seaboard in Baltimore, Washington, and Alexandria. See you again soon!

“What Should I Do With My Life?”