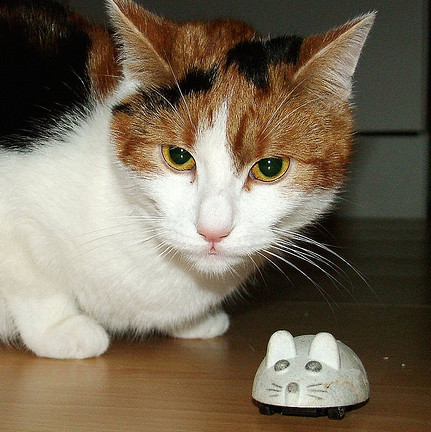 I was coming back from a run up and down Mount Tabor in Southeast Portland. I know the route well. It’s about a 5-6 mile loop from my house, depending on which path I take. More often than not, when I’m home for a while I run it at least once a week.

As I neared my neighborhood toward the end of the run, I noticed a cat in a driveway. Being a cat person, I often say hi to felines when I see them out and about on my run. Cats being cats, sometimes they follow me for blocks, intent on being my friend for life, and other times they can’t be bothered to acknowledge my presence.

This cat, I noticed, was different. He was sitting on his hind legs in the driveway, staring intently at something. Maybe it’s because he was so intent on the object of his fascination (was the cat taking Adderall?), or maybe I was just tired toward the end of the run—but for whatever reason I decided to slow down and walk over to the driveway.

“Hey, what’s going on?” I said to the cat. (Yeah, I talk to cats the same way I talk to people. If you’ve ever had a cat, you understand.)

The cat gave no response. He was fully immersed in something, and as I got closer, I could see what it was. There was a mouse! A tiny one, shivering in an isolated section of grass near the driveway—and just a paw’s swipe away from the cat.

Despite being a friend of animals, I feel no special affection for mice or rodents of any kind. Life isn’t fair in the animal kingdom, and I don’t have a moral objection to the reality of predator-and-prey.

Even so, the mouse was so small! And he was shivering. Right or wrong, I ascribed the shivering to fear. If I were a tiny mouse, trapped by a full-sized cat in someone’s driveway, I’d be afraid too.

I decided to intervene in the laws of nature. The mouse would live another day!

First, I tried to reason with the cat. “Dude,” I said to him. (I call everyone dude, regardless of age, gender, or apparently even species.) “I have an idea! Let’s do something other than stare at this mouse.”

I tried to distract the cat by getting in his line of sight, but he’d have none of it. He looked to the left and to the right, determined to get back to mouse duty. Meanwhile, the mouse wasn’t moving. WTF, mouse! I thought. Here’s your chance to make a break for it, and you’re just sitting there.

Then I decided to do something drastic. I picked up the cat—“Dude, let’s take a walk. Can I pet you? Want to play a game?”—and moved him several meters away from the mouse. Surely, now, either the cat would forget about the mouse or the mouse would make a mad dash, or both.

But the cat didn’t forget, and the mouse refused to go anywhere. The mouse just kept shaking in fear, and no matter how I tried to erase the cat’s short-term memory, he remained fixated on getting back to his prey.

While I was trying to reason with the cat, I’d noticed that the garage door in the driveway was open. It wasn’t just me, the cat, and the mouse: another human was nearby, and maybe they’d just gone inside to get something. I didn’t want them to come back and find me in their driveway, sitting on the ground and pestering their cat, who was getting annoyed at my intervention.

I finally had to move on. “Okay, mouse,” I said as I went back to jogging the rest of the way home. “I did what I could, but it’s all you now.”

I never found out what happened after I left the driveway that day. For the purposes of this post, let’s assume that the mouse was fine. He went on to live a happy mouse life, playing in the grass and eating Swiss cheese before dying in hospice at an old age.

The lesson, I think, is that at different times in life, all of us are that mouse. We have a chance to make a break for it. We’re given a second chance. Maybe someone has shown up on the scene to intervene on our behalf. Maybe the universe has conspired in our favor, or something terrible that we’re sure is going to happen never comes to light.

Even so, we just can’t break free. We’re trapped, stuck in our fear and willing to endure the threat of being ripped apart because it’s the only reality we know. We would rather be mauled to death than dream of another way of life.

If you know someone like this, I don’t think you should judge them. We need grace for those who are stuck, because sometimes it’s so hard to change.

And if you’re the one feeling trapped, I think you need courage to not be the mouse. When the time comes, you need to run as fast as you can. If you don’t make it out, well, at least you tried. Won’t freedom be worth every effort? Besides, what if you do make it?

Whether cat or mouse or jogger, or whether writer or reader, we all need to make good choices. Somehow, someway, we have to fulfill a destiny that lies beyond the driveway of fear.