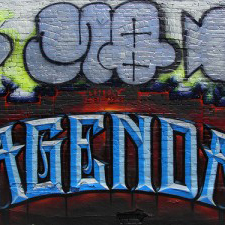 In 2009, I visited with Seth Godin and his Alternative MBA students. Afterwards, I asked Seth for advice. “I know it’s a long list,” I said, “But what’s one thing you think I can improve upon?”

He said, “I think you need more of an agenda. Consensus is overrated!” That was a very Seth thing to say, and I liked it. For the rest of the year, I thought about the agenda.

This is a six-part series to explain how I think we can change the world. I originally started AONC with the goal of writing for 1,000 people. Now my goal is 100,000 people, and it looks like that’s only a year or so away. Lesson learned: small goals turn into big ones if you take them seriously. And also: it’s good to be clear on what you’re really about.

So with that in mind, let’s get started. Attention everyone! Here’s what The Art of Non-Conformity is all about.

It All Starts with Asking Why, and Not Enough People Are Asking

The prologue of the AONC book begins with this analogy:

It’s not bad advice, even if it’s sometimes used to exert control more than to support independent thinking. But one day, you grow up and suddenly the tables are turned. People start expecting you to behave very much like they do. If you disagree and don’t conform to their expectations, some of them get confused or irritated. It’s almost as if they are asking: “Hey, everyone else is jumping off the bridge. Why aren’t you?”

For a long time, I used this image as the desktop background on my MacBook. A simple question that we looked at briefly last week:

Why do you do this every single day?

Why do we do the things we do? What’s the point? What are we working towards?

More than anything else, asking why and understanding our motivations begins to create the possibility for anything else we want to do. It can also be an easy step, at least at first, because it does not require that you quit your job, redefine your relationships, or do anything other than think. (Alas, thinking does not always come naturally: in the words of Martin Luther King, Jr., “Nothing pains some people more than having to think.”)

Even though thinking doesn’t require any additional action on its own, it does tend to lead to action at some point. Over time, it is difficult to believe one thing and consistently do another—but that comes later.

If everyone could answer the question of why they do what they do, I think the world would be a better place.

That’s Part I. Stay tuned for Part II on Thursday.

And greetings from Louisville, Kentucky, stop #15 of the 63-city Unconventional Book Tour. Only 48 more cities to go…

Why Do You Do This Every Day?