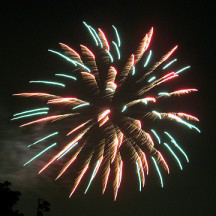 I didn’t write an Independence Day post last week partly because I’ve been on the road. Burkina Faso is a fun enough place to visit, but there were no fireworks displays at night to celebrate America’s intent to withdraw from King George’s Britain.

But the other reason is that I think of a celebration of independence much like the Thanksgiving holiday. The holiday later in the year is all about eating pie and being grateful. I like both of those things; I just think that being grateful (or eating pie!) shouldn’t be reserved for one special day.

So while it’s nice to reflect on a country’s independence from foreign powers while waiting for the pizza guy to arrive, just as our forefathers did, I think it’s better to think about independence on a more personal and regular basis. What is independence, really?

Part I: People who lack freedom due to no fault of their own

After starting in Burkina Faso, I’m now writing this post from Niger. Burkina and Niger are both beautiful countries, well worth coming to if your world tour takes you this way. They are also countries where a very large percentage of the population is desperately poor. In Niger especially, about 50% of the people are struggling due to a recent famine. It’s hard to sit around thinking big thoughts when you’re wondering if you’ll have enough to eat next week. If you can’t feed your children, you’re not very independent.

From the other side of the glass, the best thing us rich people can do is work to create a world without absolute poverty, not through patronizing, but through empowerment. Personally, I’m a big fan of clean water. Even though I’m in Niger, I can afford myself the extravagance of drinking water that won’t make me sick.

That’s a nice freedom to have, and that’s why we should all do what we can to help everyone achieve the luxury of choice.

Part II: Our own, self-created non-independence

The other kind of non-independence is what most of us in the non-poor world are more familiar with. This is the self-created kind, where we end up giving away our independence in exchange for perceived security. We get sucked into routines and patterns that aren’t at all what we hoped for, but to turn around and make a big change is too difficult.

Inertia and comfort are the greatest hindrances to independence. Some people manage to do it, like Jodi who saved for years to leave her job as a corporate lawyer and travel through Burma, or Audrey and Daniel who have made a career out of international development consulting from the road. And sometimes a camel really does go through the eye of the needle.

I love the exceptions. But most of the time, we limit ourselves in the name of obligations and responsibilities.

Action Plan! (It’s not just something you read)

So I recommend we do two things on this non-independence day, or whatever day it happens to be when you come across this.

First up, do one thing for someone else.

It’s easy to pretend that big, global problems don’t exist; I do it most of the time too. I ignore a lot of people, from beggars on the street in West Africa to people brandishing countless petitions on the street in Portland. I ignore them because I know I can’t help them all, and therefore I make the false choice to help no one.

But why not decide to reach out to the next one who comes along? I’m staying in a hotel and drinking all the clean water I want. The least I can do is buy rice for someone.

Back at home, I don’t really enjoy being accosted by petitioners for every imaginable cause in my neighborhood. But I know that plenty of other people will be rude to them, so I might as well be someone’s happy customer. Where do I sign?

Perhaps you’re not in Niger at the moment, or maybe you don’t have relentless petitioners out for blood and signatures in your neighborhood. But what do you have? What can you do?

If you’re not sure or just need the turn-key plan, join forces with our Ethiopia campaign. 100% of the money goes toward providing wells with local organizations in two communities. We haven’t promoted it much since launching it earlier in the year, but rest assured I’ll be going all-out this fall as I tour North America. It’s a project worth investing in.

Secondly, do one thing for yourself.

It’s not all about everyone else; your independence is worth fighting for too. Don’t give it away!

What can you do to take one step toward greater independence? Career independence means that your own competence is your security, whether you work for someone else or not. Financial independence means you understand the values that guide your income and expenses. Relational, spiritual, intentional, and so on—take your pick of independence-building. Just do something.

Fireworks, pie, celebrations—I could take them or leave them (well, except for the pie). But independence itself is the best prize. Let freedom ring!

Whatever independence means over there in your world, it’s probably up to you to make it happen. Happy non-independence day, everyone.

Who You Are and What They Say