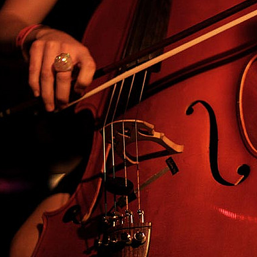 “A little knowledge is a dangerous thing…”

Thanks to the use of Frequent Flyer Miles, I flew back to New York City from Bucharest last year in Delta’s nice BusinessElite cabin. Hanging out in the airline lounge before the flight, I met up with another traveler, a professional musician from New York named Hannah Chang.

Hannah was the only person I had ever met that was carrying tickets for two confirmed BusinessElite seats all to herself. Technically, she didn’t use both of them for herself—instead, one was for her and one was for her cello, which traveled with her wherever she went.

Hannah told me that the Bucharest Symphony Orchestra had commissioned her to come over and play one 90-minute concert. She came in on the flight two days ago, rehearsed the next morning, played the concert, went back to her suite at the Marriott, and now was flying back to the states before heading to Argentina the following week.

Hannah is a real-life virtuoso, a child performer who grew up in Korea, moved to New York, and turned pro. She travels all over the world, usually for a couple nights at a time just like in Romania, and gets paid to spend hours and hours every day practicing her scales and her Mozart.

The Cost of Being a Highly Specialized Expert

Flying home with Hannah and her BizElite cello made me think about virtuosity. What does it take to be a real expert, I wondered, and what do you get in return?

I just checked the price of a Business Elite seat on the Bucharest-JFK route. The cheapest one I could find, manipulating the dates a bit, was$2,835. Multiply that by two, since there are no Business Class discounts for cellos as far as I know, and you’ve got a minimum of $5,670 that the orchestra needs to pay Ms. Chang to come over and play for 90 minutes. And of course, that’s not counting her performance fee, which is most likely in the low five figure range.

If you want people to drop $5,670 on two Business Class plane tickets for you to swing into Bucharest and play the cello for a couple of hours, you have to provide some serious value. You have to be able to do something that very few other people in the world can do.

The way you do that is by becoming a virtuoso.

The time cost of becoming a virtuoso—which I’m defining here simply as a measure of extremely high expertise—is about 10 years of consistent training for at least several hours a day. This is the consensus view from a wide scientific literature on virtuosos from various disciplines.

Roughly, this breaks down to 14,600 hours over the course of a decade (4 hours a day, no weekends or holidays). According to experts who study the experts, If you spend approximately 14,600 hours practicing the cello, learning to be a surgeon, playing chess, or doing any activity that has a progressive learning scale and can be evaluated by other experts, you’ll achieve the status of being a virtuoso.

Yes, there are some disclaimers, and the most important one is that you have to have somewhat of a talent at playing chess or cello to begin with. But most virtuosos are not innate geniuses; they are instead highly disciplined individuals.

The secret they share across their diverse fields is that with an investment of enough time, you too can get a Business Elite ticket for your cello and a two-night, high-paying trip to Romania. All that’s holding you back is about 14,000 hours.

The Case for Virtuosity

Aside from getting paid to fly around the world for one-night concerts, there are other long-term benefits to becoming a virtuoso.

Perhaps most interestingly, virtuosity can lead to fame and the ability to branch out after you’ve achieved the initial recognition. The strange phenomenon of being considered a “guru” in a highly-specialized niche is that once you are known as one kind of an expert, all of a sudden you’ll start seeing people look to you for your opinions about other, seemingly unrelated subjects. It may not seem fair to other people who know more about the other subjects, but it’s just how the world works.

For example, look at Steven Levitt, the guy who wrote Freakonomics. In his New York Times blog, he writes about all kinds of random stuff. A sampling of his recent writing turns out articles about the status of the penny, baseball, and global warming. Are all of these topics really that connected to behavioral economics, his base field of expertise? Perhaps in a far-fetched way they are, but if he hadn’t established his status as an authority figure, the chances that the NYT would come calling are pretty slim. Economists aren’t exactly a scarce resource in the world of commentators these days.

(I’m not saying Levitt is unqualified to write about random subjects. In fact, his analysis is usually excellent. What I’m saying is that he is now regarded by his audience as an expert on all kinds of things that have nothing to do with his original subject.)

The same is true with Thomas Friedman, who started out as a journalist covering the Beirut-to-Jerusalem beat and now opines about anything related to globalization, politics, and world affairs. He’s not always right, but he always has a huge audience ready to dissect and argue about every word he writes.

Traditional academics and other people who try to preserve their own claim to expertise love to hate people like Levitt and Friedman. They can’t stand the fact that others are taking an insiders’ game to the masses and capitalizing on their status as recognized experts.

Therefore, you can become an expert in something and catapult to fame in something else. But wait a minute… is that what you really want to do? Despite the clear advantages, I believe it’s better for most of us to skip out on virtuosity.

The Case Against Virtuosity

First, the true virtuoso’s life is a lonely one. Four hours a day is the minimum practice time required over a full decade. Many virtuosos practice much more than that, and the habit of valuing practice over any other activities is ingrained from an early age. Some virtuosos may be able to live normal lives complete with a good balance of social activities, but many others view the absence of close friendships as a sacrifice for the practice schedule.

Virtuosity also requires intense, sustainable concentration skills. Many of us from the A.D.D. generation, including me, are not cut out for this. I have a hard time concentrating on any one task for more than 20 minutes at a time. Despite the current thinking on multitasking, I am a consummate multitasker and don’t “single-task” well. I think I could probably train myself to concentrate for longer periods of time, but I don’t think I’d ever be up for 4-6 hours of the same kind of activity day in and day out with no breaks.

Intense specialization prevents you from learning a lot of other things. If you want to be really, really great at something, it’s possible—it will just take a set number of hours that you can’t do anything else with. Before you tune up the cello, you should carefully think about how good you really want to be.

It’s a deceptively simple consideration. To achieve virtuosity requires an average of 14,600 hours. But to merely be good requires much less. How much less depends on who you are, what you’re studying, and where you draw the line at being “good enough.”

Foreign Languages
I don’t think I will ever become completely fluent in French, my second language. The attainment of true fluency in a language not spoken in childhood takes a big commitment—usually about 4-5 years of consistent, daily study (although only about 1-2 hours a day is needed for most people). For languages that are more difficult for English speakers, like Mandarin Chinese, Arabic, and Hindi, closer to 6-7 years is required. (You can read more about this here.)

But if fluency is a daunting challenge, proficiency is not. For most people willing to commit to it, learning an additional language to the point of being able to speak, read, and understand at a functional level is much easier. For me, I’d rather be relatively comfortable in a few languages than completely fluent in one additional language.

Musicianship
The same principle held true when I was learning to play jazz music about seven years ago. My main instrument was bass (electric and acoustic), but I also played piano and several other instruments. With the other instruments, I mostly wanted to learn the basics—not become a virtuoso, or even highly proficient. I just wanted to learn to play the saxophone, clarinet, cello, drums, and various other instruments to a basic level. Once I achieved that, I moved on—and what I learned was helpful in my main goal of becoming a well-rounded jazz bass player.

A lot of people know the first line of this quote from the English poet Alexander Pope:

“A little learning is a dangerous thing…”

Reading the rest of it puts it into better context:

“A little learning is a dangerous thing; drink deep, or taste not the Pierian spring: there shallow draughts intoxicate the brain, and drinking largely sobers us again.”

Ignoring the archaic English words (Pope wrote it in 1709), this proverb basically means:

“Don’t just learn a little, because then you may think you know more than you really do. Better to learn a lot, and then you’ll be more qualified to offer your opinions.”

Whether you choose to learn a lot about a lot of things, or achieve true mastery of one subject, don’t neglect your learning. 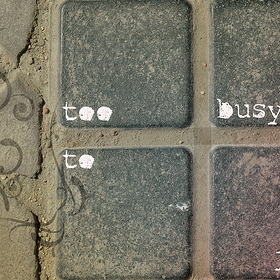 “I’ve Just Been So Busy Lately”