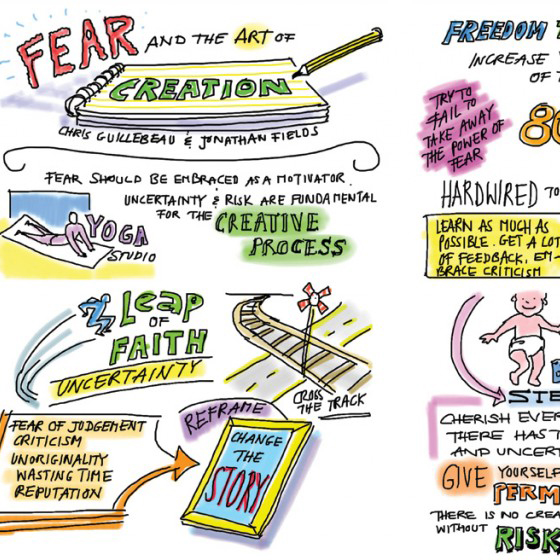 Earlier this year I went to Austin to co-facilitate a discussion at SXSW with Jonathan Fields. Our topic was “Fear and the Art of Creation,” and we had a great crowd. Despite the challenging time slot of early Sunday morning, tons of people showed up and filled the room.

I said a few things in an attempt to sound mildly intelligent (my secret: always be the opening act and get off stage quickly), and then Jonathan said some much more intelligent things. The image from this post includes a few of the stories we shared with the audience over the course of an hour (hat tip to Ogilvy Notes for the fun illustration).

At some point we dragged Kate Northrup up to the front, who also said some intelligent things—the car in the upper-right corner of the illustration came from where she talked about how she expected to marry a lobsterman in Maine, but ended up on a cross-country road-trip of undetermined length instead. (I guess you had to be there.)

This conversation was also an early preview of Jonathan’s new book, which officially launches next week. The book’s theme is all about turning fear into fuel for brilliance, redefining risk, and embracing (not just overcoming) uncertainty. I wish I had written this book myself, but because I didn’t, I’ll just have to buy lots of copies of this one.

Here’s a clip of Jonathan speaking at WDS 2011 for a more extended preview of his work:

After knowing Jonathan for three years, I’ve now spent time with him in Portland, New York, Austin (twice), Chicago, and Pittsburgh—where we spoke at the same TedX event at Carnegie Mellon two years ago. I asked him to be the final WDS keynote speaker because I knew he would do a great job at sending our attendees out to properly take over the world. (Similarly, I asked our mutual friend Pam Slim to be the opening speaker because I knew she would set the tone well.)

These days I get at least one review copy of a new book in the mail every day, and I’m only able to write about ones that I think are especially important or timely (I give the others away to the local library or used bookstore). Rest assured: this one fits the bill! It deserves broad readership.

If you’d like to check out the Uncertainty book, one tip: now is the time to do so. A lot of what happens with the life of published book depends on what happens the week of the launch, which is why I want to help give this one a push now.

You can buy it on Amazon, Barnes & Noble, Chapters, or support your local bookstore. I have already pre-ordered several copies myself, as I know this is a needed resource at a critical time. If you read and appreciate it, help him out further by leaving a customer review or telling your friends about it.

Travel note: I’m in Tashkent, Uzbekistan today… all’s well, but I won’t be around for emails or blog comments. We’ll pick those things up again next week!