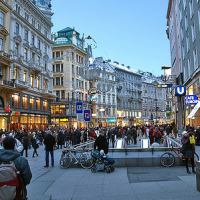 The first time I went to Vienna, I didn’t expect to like it as much as I did. I was tired after a two-week trip to Africa, and headed back to the U.S. a couple days later. The dollar had hit another all-time low against the euro the day before my arrival, providing even less motivation for visiting an expensive European city I expected to find crawling with tourists.

All that to say that the city of Vienna completely surprised me by how truly beautiful it was. From start to finish, virtually everything about my stay went right. From the airport I took the express CAT train to the Landstraße station, where I changed to the underground metro. At the city station, an Austrian Airlines check-in desk allowed me to check in to my ongoing flight even though it was two days away. I took my boarding pass for a flight that wasn't leaving for 36 hours, which I didn’t even think was possible until they handed it to me.

Walking down to the subway, a guy approached me, saying something I didn’t understand. “Entschuldigung, ich spreche kein Deutsch,” I replied, using a full third of my German vocabulary.

I’m always impressed by multilingual panhandlers. In America they could work for the U.N., but elsewhere in the world they have to ask for spare change in the subway. Anyway, the metro line took me exactly where my directions said it would, and I found my hostel a few short blocks away.

If this sounds normal, it’s not—I have a recurring experience of getting lost nearly everywhere I go, usually with my bags and often for an hour or more. It’s a small miracle when I successfully arrive at my destination in an unfamiliar city without getting lost at least once.

The hostel was just what I needed: a small dorm room with a writing desk and a window that looked out over a pretty courtyard. After dropping off my bags, I walked to a bakery I had seen on the way in. The sun was shining and I sat outside for 40 minutes, sipping cappuccino and brainstorming some notes for a business project. Life is good, I thought.

That evening I did some more business work and went running along the river Wien. It was incredibly relaxing and served as a good capstone for my first day in the city.

The next day was much the same—perfect chocolate croissants, friendly people, fun streets to wander. The skies were overcast and it rained off and on throughout the day, but I live in Seattle, so that didn’t bother me.

At the end of the trip I decided two things: first, I love Vienna and will start using it as a Star Alliance hub city instead of Frankfurt from now on. Second, I realized that part of what I like or dislike about certain places has to do with fairly narrow, personal standards. Is it a nice country to run in? Are there fun discoveries to be made? Of course there always are, but are they my kind of discoveries?

I hope I’m not becoming materialistic. At any rate, I do try to find beauty wherever I am. And by these admittedly personal and quirky standards, Vienna is beautiful. I spent my last morning at my favorite café, where I had gradually become amazingly fluent in ordering various kinds of coffee and croissants. This might not get me a job at the U.N., but it’s a good skill for my own travel needs.

When I went back to the airport, I headed straight to departures thanks to the boarding pass I received two days earlier. I left Vienna and traveled further east to Romania, which I expected to be a fairly direct contrast to everything I found in Austria.