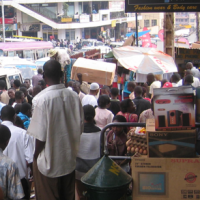 A few years and many trips ago, I learned that it is usually better to travel by land whenever possible. I love flying, and I even love hanging out in big airports for hours, but it’s true that the experience of flying from one place to another often isn’t always that different wherever you are in the world.

When you travel overland, however, you’ll almost always meet people and experience life as it’s seen through more natural perspectives. When I have the choice, I usually try to fly into one country, travel overland for a while, and then fly out of another airport at least one country away.

I decided to consider it evidence of an achievement that had personal meaning to me, even if other people might find it incomprehensible. I also decided that I wouldn't necessarily want to do this again... but I’m really glad I did it once.

5 Journeys to Cotonou, Benin
The African Dichotomy of Hope and Despair

Did you enjoy this article? Please pass it on to others at StumbleUpon, or share your own thoughts in the comments section. Read More