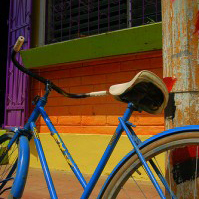 I began my latest trip as scheduled and am slowly working my way towards Europe, trying to ignore the news about the big British Airways strike because there’s nothing I can do about it. If I close my eyes it will go away, right?

If you’re new here, this weekend space is dedicated to a Sunday Store Update where I write about the small business side of AONC.

On this trip I’m busy preparing for the upcoming launch of Empire Building Kit, my biggest business project of 2010. As part of the process, I’m interviewing a selected group of lifestyle entrepreneurs who have built small businesses with less than three employees and more than $50,000 a year in net income. It’s been fun to connect with various people from various airports on the phone and by video—more interviews are scheduled this week, and I’m learning a lot from them.

In other news, my co-conspirator Pam Slim and I recently did a (very) soft relaunch for the next groups of our $100 Business Forum. The inaugural group officially wound down at the end of February, although because it was the first time for us, we gave them an extra 30 days and a free PDF with all the lessons.

Anyway, I didn’t want to make a big deal about the next groups, so I’m not even emailing our big list about it, just posting it here. If you’re interested, the May group has a few spaces left, and the June group has plenty of space—at the moment. It won’t last long, and once we fill up the spots, we don’t add any more out of respect for the integrity of the group.

Read more or sign up for that here: $100 Business Forum Registration

If the $100 Business Forum isn’t your thing, here’s another idea. A while back I wrote about a fun course from two friends of mine called Mondo Beyondo. The course is all about dreaming big—something I believe in very much.

As I said at the time, the MB platform was a big inspiration for my own course planning. It’s now available for registration directly from UnconventionalGuides.com, and if you register there you get an extra interview that Andrea did with me before they launched their class last year. Of course, you can also register directly with them on their site, but either way, it’s worth taking a look at.

The next Mondo Beyondo class starts in May, and it goes for five weeks. Read more or sign up for that here: Mondo Beyondo Registration

That’s it for now. I’ll be headed out to Europe shortly, where I’ll base myself in various countries until coming home in early April to prepare for whatever happens in Chicago, the TedX talk in Pittsburgh, and the Empire Building Kit launch on April 7th.

Have a great week in your part of the world!

Behind the Scenes at the $100 Business Forum