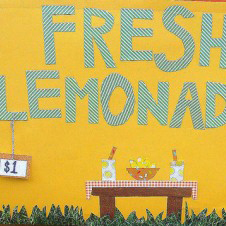 Greetings from Portland, where spring has arrived outside my window…. at least for today.

This is the Sunday Store Update, where I share some brief news about the business side of AONC.

We recently came to the end of the inaugural $100 Business Forum group, and I thought I’d report back to everyone to let you know how it works. This video shows the interface of where we’ve all been spending 20 minutes a day for the past month:

[In an unplanned scene, my assistant Libby jumps on my head about halfway through.]

As I say in the video, I’ve really enjoyed spending time with all of the participants. They have made the group much better than it would be with just Pam and me.

We’re going to have two new groups, one in May and one in June. Due to the popular demand from the first group, we’re also going to have a “Stage II” group called Marketplace. This group will primarily be for $100 Business alumni, and it will be available for our February, April, and May groups.

For the May and June spaces, I’ll offer them first to the waiting list (send me a message to join) and then to anyone else. I don’t think we’ll have a problem filling them right away, so please only join the waiting list if you really want to register.

Anyway, nothing’s for sale today—mostly I wanted to report back to everyone who was interested in the project, as well as people who have signed up for April and have been patiently waiting for their group to begin. We’re almost there.

In other news: I’ll look forward to meeting many AONC readers in Austin, Texas this Saturday night during the great SXSW. After that, I head out on a big trip to Cyprus, the Ukraine, Cape Verde, and beyond.

While I’m traveling I’ll be working more on the Empire Building Kit, the other business project I mentioned recently. I had hoped to launch that up as early as next week, but it’s not ready yet. I’ve set a hard deadline of early April, so it won’t be much longer.

Wherever you are in the world, I hope you have a great week.