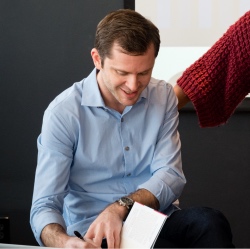 When I started Side Hustle School, the main commitment was the daily podcast, which is still going strong 60+ episodes in. People are responding to it very well, and I’m having fun. Yay!

But I don’t do small very well, so in addition to the daily show, there’s also a traveling workshop series and an upcoming book. I recently completed the first set of workshops and I learned a lot.

Here are a few reflections based on stops in four cities: Vancouver, Seattle, Portland, and Phoenix

(And yes, eventually I’ll be expanding eastward… more on that at the end.)

Oh, and we made a fun video at the Portland workshop. Check it out and see if it might be a good fit for you!

And of course, more on the way. You can vote for your city on that same page, and if we have enough interest, I’ll make a plan to come!

Side Hustle Workshops Start Next Week! Join Me in Your Choice of 4 Cities

30 Days of Side Hustle School: Cruising for Dollars, Six-Figure Candy Hearts, and Saddles for Pet Chickens
© 2023 The Art of Non-Conformity | Site by Bytegrow Technologies