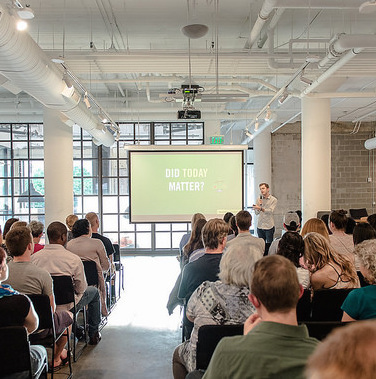 Whenever I give a talk for the first time, I’m very nervous. Like a lot of internal struggles, I don’t think the goal is to pretend the nervousness doesn’t exist. It’s a talk, also known as public speaking, also known as the #1 fear for a majority of the population. If you’re not nervous at all, you’re probably not treating it with the attention it deserves. Whenever I have the chance to speak to a group, whether large or small or somewhere in between, I take it seriously.

If it’s a new talk or a one-off, something that I prepared entirely for a specific experience and won’t repeat again, I spend at least several hours beforehand thinking about it. Behind the stage, or in the nearby stairwell, or around the block outside the venue, I’ll pace and look at my notes and think through what I’m going to say over and over.

Thankfully, it usually goes well. It’s not always amazing, but when you practice and prepare, it’s rarely a disaster. I have good days and bad days but overall I’m at least consistently decent.

Still, when it’s a talk I’ve never given, it’s very hard to “stay in the moment” and “be present.” If there’s a speaker before me, I try to listen to them, but in all honesty I’m mostly thinking through what I’m going to say when it’s my turn. When it’s my turn in the front, I try to connect with the audience, but much of my attention is focused on remembering my points and transitions.

As a lifelong introvert, it’s all fairly exhausting—which is not to say it’s bad. I’m fortunate to be able to speak to people who care about what I have to say. When we take on challenges, they often exhaust us for good reasons.

All this is very different, however, when I go on tour. On tour I give the same presentation in a different city every night, usually with a custom intro and some minor variations. The first few nights, I’m just as nervous as I am for a one-off talk, because the material is new.

After those trial runs, though, I settle into a rhythm. Three or four nights in, I’ve internalized the material. I know it very well from start to finish. I might forget a point or two, I might flub a couple lines, and I might go off on a tangent and have to rope myself back in—but overall, I have the content down solid.

And that feels great! Because then, when I’m not stressed about what I’m going to say, I can focus almost completely on how I’m going to say it. I’ll pace backstage or in the stairwell for a few minutes beforehand, but that’s just to gather my thoughts. I’m still a little nervous, always, but not in an overly stressful way. I can chat with people beforehand without worrying that I’ll lose the flow.

At the end of the talk, I’m usually tired (I’ll always be an introvert and need my recovery time), but I’m not entirely exhausted. I can regroup and recharge later that evening if the talk is in the daytime, or by the next morning if the talk is at night.

I also get better as I go along. I know where people are going to laugh. I know (well, I think I know) where I’m talking too long and not connecting well. I try to build toward moments of impact. The old Maya Angelou lesson is extremely over quoted, but that’s because it’s so true: “People will forget what you said, but they won’t forget how you made them feel.”

With that in mind, I try to make people feel better about themselves, not in a false or “motivational” way but rather by pointing out their strengths, and by creating connections among people in the audience.

Of course, it’s always a process. I’m not an expert speaker and I want to continue to improve. I don’t improve through classes or lessons, though. I improve through listening and paying attention. I watch what other people do, and I think about how I could have said something better or been more helpful.

And every day I just keep going. One more city, one (sometimes two or three) more talks. Another chance to craft connection. Probably another couple of mishaps or flubbed lines. But hopefully there will also be more impact, more affirmation, and something that creates a magical space for both speaker and audience. 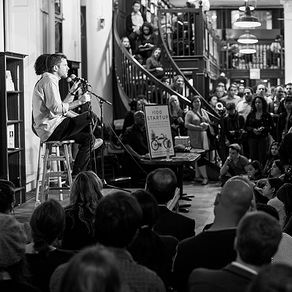 Take the “Born for This” Free Quiz: What Kind of Work Style Suits You Best?