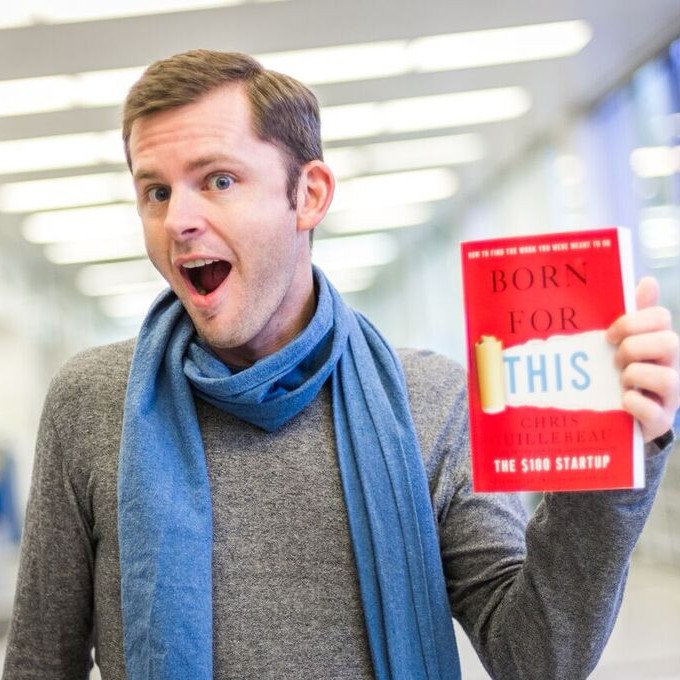 Greetings from Denver! Weeks II and III of the Born for This tour are coming to an end, and it’s been a great experience overall.

For the most part, it’s been a non-stop experience. At one point I did 14 days in a row with only one day off from events or travel or both (usually both, since I typically do an event in the evening and then travel to the next city the following day).

Oddly enough, I only felt tired on the rare days of rest or during the periods of lesser intensity. Maybe the lesson is: when you’re going non-stop, don’t stop. 😃

Born for This Is Doing Great… Because of You!

I have no complaints about working hard. I spent a long time writing the book, and I want to make sure it reaches the right people. Ultimately, though, whatever success it finds comes directly from you, the reader.

So far it’s going very well! The book debuted at #5 non-fiction in the whole country and was an immediate bestseller. Since then it’s continuing to sell, and more importantly I’m hearing from people about how it’s helping them. Nothing makes an author happier (well, at least this author) than to know that people are taking action on the lessons of a book you wrote.

If you haven’t picked up a dozen copies of your own yet, you can see 140+ independent reviews on the Amazon listing page.

Note: I encourage readers to leave reviews, but I never tell anyone what to say. I’ve never paid for reviews or asked someone to leave a review without reading the book first.

Where I’ve Been: Everywhere!

Here are a few highlights from the past couple of weeks.

After the first week’s initial tour of Southern California (Santa Monica, San Diego, and Irvine), I hopped over to Phoenix for a return visit to Changing Hands, one of my favorite bookstores. In fact, I’ve been there for every book!

I went back to Portland for two days before continuing on to Dallas, where we had a fun evening at a ballroom in Grapevine. I’d never spoken to this group before (although many old friends came out as well), and they asked lots of good questions.

Next up was Houston, where I returned to Brazo’s, another store I’ve been to multiple times now.

For the completion of the Tour de Texas, I went to Austin, one of my favorite U.S. cities because … well, it’s Austin. I was there a few weeks ago for a last-minute speaking gig at SXSW, but I generally prefer coming to town when 300,000 other visitors aren’t also around.

The event was at Book People, which is awesome. The event was co-hosted by longtime friend Betty Jean Bell, who is amazing. Another good friend, Laura Simms, joined me for all three Texas stops. (You deserve a medal, Laura.)

From there I went to the northeast: Philadelphia, Boston, and New York City. All three stops were special in their own way. In Philadelphia the event was smaller than usual, but that led to our group being able to spend a lot more time conversing and working through things together.

I went “down south” to Nashville and Atlanta, where I got to visit with my family, among others. Then I went to Florida (Tampa + Miami) for more friends and family visits.

After that I went to Chicago, Omaha, Denver, Salt Lake City, and … Livingston, Montana. Chicago and Denver had especially strong turnout. Livingston was great because the town is very small, yet the organizers came together to produce a very legit event (thanks, Rachel & team!).

Yep. It’s been a whirlwind, but as I said, I have no complaints. I’ve talked with thousands of people and am excited to keep going.

Coming Next Week: Toronto, Vancouver, Calgary, and beyond…

I’m headed to New York for a private event this weekend, and then I’ll be visiting my friends up north. Here’s next week’s schedule:

Remember, you can get free tickets at BornforThisBook.com. Everyone is welcome, and the events are fun and informal. You won’t be bored, and there may even be cupcakes.

So in short: it’s going great and I’m so glad to share this with you!

Tags: books, born for this, on the road, tour

Two Other Great Books Out this Week: Daily Love + Smartcuts

A New Journey Begins: “Born for This” Is Now Available!

Live from the Road: Born for This in Victoria, Canada

Born For This: Join Me on the Spring 2016 Tour!
© 2023 The Art of Non-Conformity | Site by Bytegrow Technologies