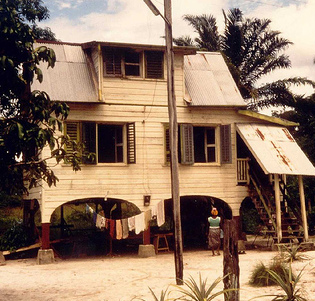 My sleep schedule is still off from the 3:30 a.m. arrival a couple of nights earlier, but it’s an early morning wake-up to get to the Guyana taxi station. I fall asleep at 2:00 a.m., and the alarm goes off at 4:45. Nice. By 5:15 I’m downstairs paying the bill and waiting for my first ride of the day.

The car drops me at the station, I pay $3, and I’m immediately surrounded by would-be chauffeurs. Five guys make a simultaneous grab for my carry-on, but I keep my hand on it too. Naturally, they all want my business for the first half of the journey to the border.

In situations like this, it’s not all about who’s cheapest — it’s also important to find out who’s leaving first. I settle for a guy who says he has eight passengers in his van and is almost ready to go. I count six, but that’s close enough. For the next 20 minutes he keeps saying, “One more! One more!” – as in, we need one more passenger before departure. Three more passengers get in, but who’s counting? We finally take off.

For the next three hours, we drive on mostly good roads through towns and countryside. I’m tired from the lack of sleep the night before, but it’s not a bad journey. Along the way we drop people off one-by-one, and at a couple of stops more people get in. In the end, it’s just me, the driver, and a Guyanese woman. The woman is meeting her friend at the ferry terminal. I’m going further – across the river, and out of Guyana and into Suriname. Next up, the ferry.

The waiting game starts at the ferry terminal. I don’t like the waiting game, but if you hate it too much, you’ll be an eternally frustrated traveler. The waiting game is where you spend an undetermined amount of time, usually at least one hour, waiting around for something to happen. In some cases, the waiting can be as much as 50% of the total travel time.

Except nothing happens. We wait in the queue for 30 minutes, then half the people go back inside to sit down. False alarm. Another 45 minutes later and we hop on board.

I have a love / hate relationship with ferries, and the quality of the relationship is determined by how long the ferry takes, how crowded it is, and how rocky the waves are. In this case I win on all three counts. The ferry takes 30 minutes, it’s full but not overcrowded, and the water is smooth. It’s a good ferry. I spend the time talking with an Ethiopian muslim who is traveling with another group of muslims (from several countries) for three weeks in the Guyanas and Caribbean. He tells me to read the Koran when I get home.

On the other side, the waiting game resumes. We arrive at a shack that serves as the immigration stop for Suriname. One guy is doing immigration for everyone — about 50 of us. He’s not in a hurry, either. One other guy is watching the whole time, and when the immigration finishes for everyone, he starts doing the customs check one-by-one. As to why they didn’t perform the tasks simultaneously, no one knows, but I’m not the only one who’s wondering.

Another hour goes by standing in the queue, but it’s finally over. I hop in another mini-taxi for the third and final part of the journey. Only four more hours to go.

The first taxi was like the ferry – full but not overcrowded. This taxi, however, was a tight fit before they put the luggage in. I sit with my laptop bag on my knees for the whole journey. A Surinamese girl falls asleep on my shoulder, and an old man who’s been allocated the front seat alternates between smoking and coughing.

We stop for supplies at a gas station. I change $10 and buy cookies and a bottle of water. The old man and I split the bag of cookies for the rest of the journey. He offers me cigarettes – no thanks.

The roads in Suriname are much worse than in Guyana, which surprises me since my impression is that Suriname is a more well-off country overall.

We pull into Paramaribo at sundown and the driver stops dropping people off. I’m last on the list, but the benefit is that I see the city en route to my hotel.

I make it to the Hotel Zeelandia, where I had booked a room in advance for two nights with the option to stay a third if I like it. It has a bed, wifi, and is next to an Indian restaurant, so I do like it.

At the Indian place I eat my first meal of the day at 7:30 p.m. just after arrival. It’s been a long day, but it was a good day. The beer is cold, and they have good channa masala. Later on I realize that the meal costs $22, but when I consider that it’s my only meal of the day, I decide that $22 is not a bad per-diem for food on a 13-hour journey.

Here I am in Suriname. Country #109. I feel like I’m far away from where I came from, and that’s just fine with me.