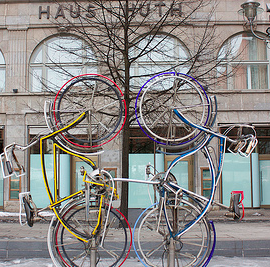 The sun came out over Portland on Saturday morning in what felt like the first time in weeks. It was a beautiful fall day, and I decided to ride my bike to lunch. Except for one problem: when I walked into the garage, my bike wasn’t there. Dolt! Where had I last left it? I couldn’t remember.

See, I ride my bike all over town. Most of the bike adventures are round-trip, but when I only need to go one-way and then head home via bus or car, I leave the bike somewhere on the street and pick it up later.

I started this practice two years ago, when I left it downtown for several days while on a short trip. It was locked up, of course, but when it comes to leaving bikes around cities overnight, that doesn’t usually matter. I thought for sure it would be gone, but when I was finally able to retrieve it a few days later, I was surprised to find it safe and intact. Victory!

Since then I’ve left the bike on the street in all kinds of random places, often for a few days and sometimes as long as a week. So far the worst that’s happened is that someone stole the seat once. It was a little awkward riding back across town with no seat, but then I went to the bike shop and got a new one for just $20. Not a big deal.

One day, I know my luck will run out, and the bike won’t be there when I return to its nesting spot. But I decided long ago that the risk was worth it. The bike cost about $250. Now that I’ve left it outside a hundred times or more, I no longer worry about losing it. When a young entrepreneur decides to claim it somehow, I’ll probably be annoyed for a day or two—but then I’ll go and buy another bike.

I was reminded of this story when I made a travel mistake this weekend. For more than a month I had been looking at a good awards redemption to go to South Africa in January. The option I saw was perfect.

For those who care: PDX-IAD-JNB on South African Airways using United miles transferred from my Chase Ultimate Rewards account. Total cost: 60,000 miles and $5 in taxes.

I put the award on a 24-hour hold and made a note to ticket it before the deadline. The night of the deadline I was busy doing other things, so I thought: I’ll just create a new itinerary in the morning, and then ticket it the following day.

Those who are accustomed to the world of long-distance travel can probably guess what happened: when I went to create a new itinerary, the flights I wanted were no longer available—nor were any other good alternatives. Ack! This was completely my mistake, and a real missed opportunity. Bummer.

Frustrated as I was, I remembered the bike scenario. I leave the bike wherever I want, and most of the time everything is fine. If one day it isn’t, it won’t be a huge deal. When it’s finally gone I can get another bike, break it in easy, and eventually start leaving it around town just as I do now.

I’ve been fortunate to travel all over the world, often for free or nearly free thanks to travel hacking. I lost out on the South Africa redemption because of my own laziness, but there will be more opportunities later.

Business opportunities are like buses. There’s always another one coming.

Travel opportunities are the same. Every week, or at least every month, there is something new to learn and apply.

Gotta be willing to let go of ‘opportunities’ to a) be happy b) be free c) be able to take the next step.

I missed a great award redemption, but I can’t worry about what no longer exists—and there will be another opportunity at some point.

Life is too short to worry about such things. If you miss your flight, take another one. Have to get to South Africa some other way? Well, surely such things are possible.

Oh, and on Saturday when I couldn’t find my bicycle, I had a vague recollection of leaving it a few blocks away. When I went to investigate, I was right. There was my beloved bike, safe and sound, waiting for another 20-block adventure to lunch.

Question: What do you worry about? How do you resolve your worry?