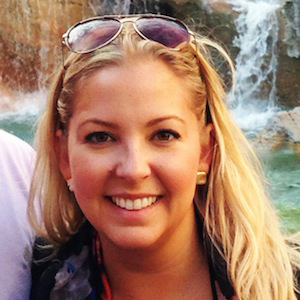 Not everyone feels comfortable traveling alone, which is one of the reasons why Megan Van Groll’s tales intrigued me. She’s an advocate for exploring the world by yourself, going so far as to spend all of her time outside of a full-time job encouraging people to do just that.

By day, I’m a social media strategist at a large creative advertising agency. My education and background is actually in studio art, so I keep a studio in my home and paint—both for myself, and on commission. Lately I’ve been doing a lot of freelance writing and blogging about travel and career design.

Above all else, I’m a travel addict and advocate for independent travel. I also believe strongly that everyone should take a solo trip at some point in their life.

Do you remember how you became addicted to travel?

I grew up traveling and didn’t know any other way. I was born in Honolulu, Hawaii, to a Texan mother and a first generation Dutch-American father, then spent 5 years of my childhood shuttling between various U.S. army bases in Germany. That’s where my earliest childhood memories were made: in Frankfurt, Berlin, in Florence and in Paris, in the many cities we visited when I was very young.

Though I was too young to realize it, I was 3 and living in Germany when the Berlin Wall fell. When we later moved to the states, I realized that what I thought was my “normal” American childhood—living in Germany and moving every other year—was actually unusual.

I went to Florence, Italy for a semester abroad. It’s easy to romanticize that experience now, but in reality, it was difficult. I had no support system and felt lost in the language. But when I got home, the reverse culture shock was even worse.

I knew Florence wasn’t home, but I felt a strong connection to a place that valued art and culture so much, that had an obsession with great food, and a comfort with chaos. Italian culture challenged the most obvious aspects of my own Americanness: a need to always be busy with something, and a desire to constantly improve everything around me.

Back home, I felt overwhelmed and disappointed with American culture. After graduating I felt like I was supposed to start my career, and I didn’t think I could afford to travel. It took a long time before I traveled again.

When you travel alone, there is no default person always at your side, someone to always talk to, to provide companionship. Your companion is you, so it’s to your advantage to quiet the negative voices and be okay in your own head.

When I travel with a man, everyone assumes he is in charge—and despite my fiercely independent nature, it can be easy to get lazy and just start acting like he is. Plus, traveling with someone else means sharing the responsibility of travel logistics and translation.

Traveling by yourself, it’s all you. Away from the normal pace of life at home, new and unexpected situations happen with greater speed and intensity. You’ll be dining in restaurants by yourself. You’ll be navigating airports, transportation systems, foreign languages by yourself. You’ll see and experience things you would not have if you’d stayed home (and isn’t that the point?).

Proving to yourself time over time that you can handle it—this builds. It stays with you when you get back. And it feels pretty good.

Congratulations, you are officially the master of your own destiny. You get to do whatever the heck you want to do, and you can plan the trip (and change it at whim!) however you want. No consensus is needed, because there’s no group (or accompanying group-think) to have any say in the shape or pace your trip takes.

Do you ever feel intimidated about traveling alone? What do you do about those feelings?

Absolutely. It takes willingness to spend a lot of time hanging out with yourself. Plus, society tells us that women need protecting and that to travel without another person is scary and dangerous (which is, of course, an exaggeration based on fear, xenophobia, and sexism).

There are certain precautions you should take for your own security anytime you travel, alone or with a group, male or female. But just as important as those precautions is why I (or anyone) might feel this way.

If the idea of traveling by yourself scares you a little, lean into that feeling and explore it. What are you worried about most, and what’s the worst that can happen if it comes true?

We humans like to think we make our choices objectively, based on logic, but in reality we spend a lot of time chasing feelings: it’s not necessarily a great career that we want, it’s the feeling of being successful; it’s not necessarily luminous skin or a slim waistline that we specifically want—it’s to feel beautiful.

The same can be said of the feelings we don’t want to experience. So, be honest: Is it really just a feeling that you’re afraid of? Are you worried about feeling embarrassed, lost, or lonely?

Do you do any travel hacking? How many miles have you earned in total?

Within months of buying Chris’s travel hacking guide, I’d racked up 100,000 British Airways points (used on a variety of oneworld partner airlines) and 50,000 American Express points (redeemable for miles on a 1:1 basis).

Since then, I’ve traveled for at least two weeks of every year to a different part of the world. So far, that includes Colombia, Egypt, Jordan, Spain (twice – I’m a total Spanophile), Italy, Brazil, and Croatia.

Window! I like to watch the world go by.

A few of my favorites for traveling solo:

This is a natural part of being out and about most anywhere – but if you’re alone and in a foreign place, it behooves you to be a little more cautious until you have a better understanding of the culture and area. When all you have to rely on is you, you need sound judgment.

Being informed of a foreign culture half the battle, as you will be temporarily joining their ranks. For example, even in Muslim countries where it’s not expected for western tourists to cover their hair, you still shouldn’t show off that sexy wrist or ankle. Even if changing your wardrobe that much makes you feel a little repressed or indignant (something I struggled with a little), it’s better than dealing with the unwanted attention.

Give a trusted family member or friend a copy of your itinerary and let them know if anything changes mid-trip. Check in with them regularly so they know all is well.

If a person or situation feels off, there’s probably a reason. Your brain takes in way more information than you can reasonably process, and it’s putting two-and-two together under the surface. Intuition and gut feelings aren’t made of fairy dust — they’re real and should be heeded.

Lately, I’ve been traveling with someone special, rather than solo. He proposed to me in the tiny, remote beach town of Jericoacoara, Brazil in between the Netherlands-Mexico and Brazil-Colombia matches at the World Cup.

We’re now planning a very small, casual wedding somewhere in Central America, so our next trip is in early 2015 to scope out a location.

“If We Never Booked the Tickets, We’d Never Go”: On the Road with Serena Star Leonard
© 2022 The Art of Non-Conformity | Site by Bytegrow Technologies