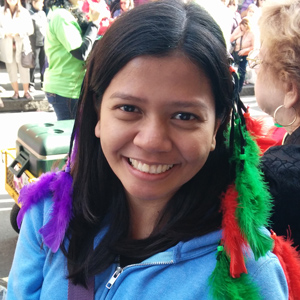 As many of our readers know, having a full-time job doesn’t mean you can’t make travel a regular part of your life. Ruby Escalona tells us how she does it.

Hi! I’m Ruby. I grew up in the Philippines, but now live in Jacksonville, Florida. I’ve always had ambitious dreams. When I was a child, I wanted to read all the books in the world.

Now, I’m passionate about traveling. My fiancé and I have desk jobs, and a motto: live a life of travel, even with a full-time job. We’re seeing the world, one bit at a time. It’s a little slower than people who are location independent, but it works for us.

Being employed full-time has actually been good for me. It has given me the chance to live on different continents, free Business Class flights, and even an allowance on some trips.

In 2008, a few colleagues of mine were discussing places they’d been. One of them turned to me and asked, “Have you ever been to Santorini?”

I had no idea what—or where—that was. My colleagues described the blue water of the caldera and the white of the buildings. It sounded amazing. I began comparing my couch-potato lifestyle with this bunch of 20-somethings who had ticked off a bunch countries on their list. I thought, I can do this, too.

When I lived in the Philippines, I had to get creative. Our salaries were nothing like what American’s make, but I did have the rest of Southeast Asia at my disposal. So I researched, learned to travel cheaply, and saved for 18 months before embarking on my first trip to Hong Kong.

It was actually a lot of fun to learn the ropes of cheap travel, and I inspired my friends to do the same. Along with the budget airline carriers in Asia & Europe and the travel hacking opportunities in America, the world has gotten a bit smaller.

My now fiancé and I budget and save, and use a variety of points and miles to fund most of our airlines and hotels. We don’t spend more than $4,000 on big trips (we have six planned this year) and do lots of little weekend trips with much smaller costs.

How do you earn points and miles? Which cards to you use?

We earn mostly through credit card signup bonuses, and use credit cards for our day to day spends. Since there are two of us, it makes getting sign-up bonuses easier; the downside is finding an award ticket for two people on the same flight.

Last year during the World Cup, we were walking around Copacabana while game 16 (Brazil vs. Chile) was on, trying to take peeks at the screens set up on the crowded beaches. We wanted to see the game, but every bar, office, store—pretty much everything—was closed because Brazil was playing.

Finally, we caught sight of a TV inside an establishment we couldn’t quite identify, other than 20 policemen were crowded around the screen. With minutes left in the game and just penalty kicks to go, I asked a policeman in my broken Portuguese the score, and he invited us to watch with the group.

Brazil won, 3-2, and pandemonium broke loose. People in their apartments opened their windows and cheered, buses honked, and everyone was in the streets in a festive mood. And we didn’t have to worry about any of the craziness that accompanied the win—we were with the safest people around.

Tell us something you’ve learned from traveling.

The first few hours of our Mexico trip taught us quite a bit.

We’d decided to fly out of Miami because I needed a visa (as a Philippine passport holder I need visas to almost every country). Even though we left Jacksonville at 4:30am, we missed our flight because in Port St. Lucie, partly because we got a driving ticket… a double bummer because that wasn’t in our travel budget.

However, at the airport we discovered our departure time had been changed less than 24 hours before the trip, and British Airlines rebooked us for free!

What has surprised about traveling?

Travel is affordable, if you have the patience to do your research and to find other ways to make it work. My friend likes to say, “You can always go to the destination that you’ve dreamed of.”

I took her words to heart and have been to several countries even with a third-world passport. Don’t let silly things like requiring visas and getting interviewed a million times by immigration officers stop you. Once you show that you really are genuine and just want to travel and see the world, doors will be opened for you.

If you want to travel without spending a lot of money, you’ll have to devote time to research. Whether it’s looking for airline deals, cheap hotels, or planning a trip based on only free things to do, it’s always handy to do your research before a trip (but you can always wing it in the end).

Where have you been recently?

We just got back from Europe, where we visited Germany, Austria and Slovakia. I met my fiancé’s friends and family for the first time, and actually, that’s where he became my fiancé…we got engaged at a castle!

Stay up to date with Ruby at Ruby Loves Adventure.