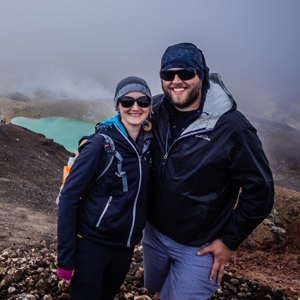 I first met Jes way back in Minneapolis. She was one of the first readers of AONC! A couple years later, I saw her in New York with her fiancé Josh. Since then, Jes and Josh got married and took off on the road—for a year-long honeymoon paid for almost entirely with points and miles.

I loved this story, wanted to hear more, and now want to share what I learned.

I’m Jes Albro and my husband is Josh Redshaw. We are both originally from the Midwest (Chicago and Minnesota, respectively), but we were living in Brooklyn, New York, when we got married. We both work for ourselves – I’m a User Experience Designer and Josh is a Digital Product Designer/Strategist. We just moved to Portland, Oregon.

Tell us a little about one of your recent, memorable trips.

Josh and I had both wanted to do some extensive traveling, so before leaving the east coast and moving west, we went on 10-month honeymoon around the world. Starting in New Zealand, we hopped over to Australia, up to Singapore and up through Asia, then flew to Israel and Europe before ending our trip in Honduras. We visited 25 countries!

Why did you want to take this trip together?

Both of us love traveling and had done fairly big solo trips (as compared to most Americans but probably not most AONC readers!). Travel was one of the things that brought us together as a couple. I’m sure most travelers would agree that it is an addiction: once you start you just want to go to more and more places.

How did you earn the miles or save the money for the trip?

To get air miles, we signed up for and used rewards cards (most of which we found through CardsforTravel.com or through the Travel Hacking Cartel). And we saved money for a full year before our trip.

How many miles and points have you earned in total?

Together we’ve earned about half a million in the last few years. Our top three programs have been British Airways (now Avios), Chase Ultimate Rewards, and Starwood Preferred Guest.

I prefer window, Josh prefers aisle. We’ve learned our ideal way to travel is to fly business class so we can each sit where we want to and still be together.

Where do you usually stay when traveling?

A variety of places! For our honeymoon, we stayed with friends, in a campervan, rooms and homes booked through Airbnb and HouseTrip, and hotels through hotels.com – they offer one night free for every ten stays booked with them.

What surprises you about being on the road?

Just how quickly hopping from country to country and living out of a suitcase becomes your new normal. You can accidentally slip into a mindset of not being overly impressed by very impressive sites (“You’ve been to one museum, you’ve been to them all… right?”). This is definitely something I had to be very conscious about, and remind myself how special a lot of the places we went really were.

Have you met any fun or interesting people on the road?

Yes! I made some of my best friends on the road while traveling solo. Josh and I actually stayed with, or at least visited, most of them at some point during our honeymoon.

Don’t just dream about seeing the world. Write down your ideas, start saving and take steps to make it happen!

Be focused with airline rewards.

We did some research and found that United had the best reward flights for where we wanted to go, so we focused on getting points that would easily transfer to United.

Tell us something interesting about you that hasn’t been covered already.

When I met Josh, I had no interest in being in a relationship. I had just gotten back to Minnesota from a trip to Australia and was planning to move to New Zealand. We met at work and decided it would be fun to hang out but keep it light since I was moving to the other side of the world.

I did go down to New Zealand for five months but the “keeping it light” didn’t work out too well—he came to visit me. Knowing I never wanted to move back to Minnesota, Josh asked if I would consider moving to New York instead. We moved there within a day of each other to give things a go. Almost two years later, to the day, we got married and headed out on our honeymoon.

We are currently saving up our United miles to go back to Thailand for a month in December.

Want to know more? Connect with Jes and Josh at J2Journeys.com or on Twitter at @j2journeys.

“Because of Traveling, We Know Ourselves”: On the Road with Jim and Rhonda Delemeter
© 2022 The Art of Non-Conformity | Site by Bytegrow Technologies