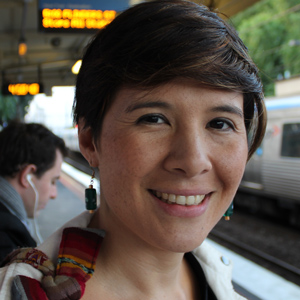 Well into her third year of continuous travel, Serena Star Leonard and her husband John spend their days exploring the world and documenting stories of people who make a difference.

I’m Serena, a half-Kiwi, half-Malaysian born in Hong Kong. My husband is John, an Irishman. We were both living in Australia when we met, fell in love, and got married in the space of 16 weeks.

I’d worked both in corporate environments and for myself for a number of years, but I wanted to change things up. My goal was to work for money one day a week and spend the rest of my time doing work I was passionate about but wouldn’t necessarily make a cent.

My project became a book, How to Retire in 12 Months. In the same year, my beloved little brother passed away. By the end of the year, my life was forever changed.

After a year of mourning, John and I decided to go to Latin America. We now travel the world to capture stories of people who make a difference with our project, Five Point Five. We make short, five-minute documentaries about people and projects, and try to inspire others so that they can make a difference too.

Do you have a memory that sticks out in your mind from your recent travels?

The first project we visited was a charity called Fundación Mariposas Amarillas (Yellow Butterflies Foundation) in Colombia. This grassroots charity was started by a former street kid, Oscar, and we showed up to volunteer as assistant teachers and make our first documentary.

It was an eye-opening experience. The programs take place in a slum—a place two taxi drivers refused to take us because it was “too dangerous.” But it’s also a place where kids who have no access to education are able to go to school.

We heard stories and saw images that struck home how tough it was for these kids. Like the bright, fun, keen-to-learn kid whose mom didn’t pay attention to him and whose older siblings were addicted to drugs. And the drunk men sitting on the street who beckoned to a small child, gave him a taste of moonshine, and laughed as the kid gulped it down then spat in disgust.

Most people lose hope as they get older and abuse themselves and others around them. I was pretty devastated for the probable future of these kids. The poverty is immense and opportunities are slim when you don’t have an education – at least Fundación Mariposas Amarillas was helping with that.

How do you react when you witness those sorts of situations?

We often battle with what we should do in each given moment. Our minds race with questions:

Do we buy lunch for this person or that person? When is giving money good, and when is it bad? Do we try to help every child/person/family/animal that needs it? When do we do more harm than good? Who do we choose to help when we can’t help them all?

We didn’t act in that moment with the boy and the moonshine. It was a single moment, and the boy ran off with his friends. I am someone who does want to step in and I am learning to pick my battles, sometimes the hard way.

The hardest part of the journey is to immerse ourselves in all of these people that are changing the world and then to leave and try to focus on the next one. I feel like I now carry a responsibility to help each one because I have seen how important their work is.

What inspired you to start Five Point Five?

We had always wanted to travel to Latin America, but there was always a reason why we shouldn’t go. Too broke, too busy, too many responsibilities. One day while walking past a travel agency, we realized if we never booked tickets then we would never go. So we booked them and decided that we would just make it work.

The idea for filming for-good projects came afterwards. We wanted our travel to have meaning. By the time we came up with the project, we only had a few weeks left to sell all our stuff, pack up our lives, and learn how to film documentaries. It was insane and stressful and we nearly changed the dates of our tickets a few times because we were so worried that we were too unprepared, underfunded, and inexperienced to spend a year traveling and film-making.

We saw a video we saw about this amazing man named Narayanan Krishnan. He quit his job to feed the hungry and destitute in his community in India. In the film he says, “Everyone has 5.5 liters of blood, we are all the same.”

We figured that if we all have 5.5 liters of blood and we are all the same, we all have the ability to make a difference—so we called the project Five Point Five.

Each year costs us between $30,000-$40,000. We fund it between the both of us, through various income channels including business coaching, selling books and courses, book royalties, website development, video production, affiliate marketing, poker winnings, and sponsorship.

We offset many of our travel costs by doing hotel, tour, and cruise reviews along the way.

What has surprised you as you’ve traveled?

My capacity to communicate without language has been very surprising. I am not someone who is confident meeting new people. In fact, I struggle with small talk in English, let alone with people whose language I don’t speak.

But John is great at pulling silly faces, hacking through language, and just making people feel comfortable. After two years of travel in Latin America I felt much more confident communicating without language. A warm smile and some silly hand signals can go a long way.

So much of language is body language anyway, and confidence is the difference between being understood or not – or at least removing the awkwardness.

Tell us about a few more people you’ve met.

In Nicaragua we filmed a project run by some incredible women, who all found themselves uneducated and needing to provide for their families. They’d turned to sex work, which is especially dangerous in Nicaragua. But this small group of women banded together to help educate and protect over 400 women in the industry with the help of funding from an international organization.

We spent a day with the women, capturing their stories and even filmed inside a brothel. It was pretty far off the tourist trail and seeing inside the rooms and dirty, dark concrete boxes these women live and work in made me very much appreciate being given the chance of having an education as a child.

Another encounter was with a wonderful woman who managed a free kindergarten in Bolivia for the locals. We jumped in a taxi with this woman and she proceeded to tell us about her past, which included over a decade in slavery. She worked seven days a week from morning until night and only earned enough to buy a bag of rice each month.

You said you met and married John in 16 weeks. What’s the story?

I was a radio host on Bondi FM. One evening an Irish artist sat in for an interview before their show. They arrived late, and thus we were all going to be late to the show, so they let me hitch a ride with them. On the way, we stopped to pick up guitars from someone’s house, and I met John for a brief, flirty minute.

Later that evening we met again backstage, got talking and just hit it off. He pretty much moved in that day! We got married on my radio show so our overseas friends and family could listen to the live stream. It was the start of a pretty magical six years (so far!).

Three years ago, we didn’t know how to use a camera. Since then we have filmed 22 short documentaries of some of the most inspiring people in the world. We’ve also filmed 18 hotels, 18 cruises, tours and destinations, and 4 music festivals in 21 countries.

We’ve also learned we can live and travel and work together as a couple (without murdering each other!).

We are currently in Thailand, and will continue through Southeast Asia until October when we will return to Ireland for a book launch. Then it’s off to Africa, and finding our next project. It may have something to do with tiny houses, eco villages and kids… but at this stage, who knows!

Stay up to date with Serena and John at Five Point Five or via Twitter @fivepointfivetv.

“Everyone Gets a Call to Adventure”: On the Road with Erin McElroy
© 2023 The Art of Non-Conformity | Site by Bytegrow Technologies