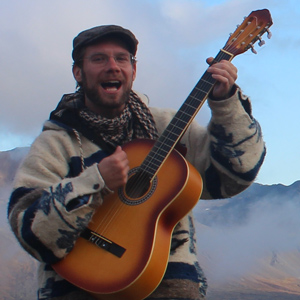 When we talked to Luke, he told us, “At the age of sixteen I wrote in my journal: ‘Tonight, when I was driving home, I had the desire to point The Bronco in one direction and just keep going and going and going.’”

Many travelers will relate to his stories.

After I ditched my return ticket in Chile and took out a student loan to finance hitchhiking from South America to Alaska, people said, “You’re crazy!” I replied, “So was Columbus!” They insisted, “This is so financially unsound!” I cried, “So were The Pyramids!”

I joke sometimes that eight years ago I went to South America and I never came back. Really, it means I performed some paperwork magic to graduate early and created a path that was there for me to take or not.

The traveling world is full of many beautiful, amusing, and terrifying moments. Sometimes, it’s raccoon attacks. Other times, it’s bandits on a train who want your iPod. Often, it is giving a smile that says, “Sorry, I’m a gringo, and everything confuses me.”

My life is an extended, nomadic journey, and thus my universe expands in wild, unimaginable ways. Even when I find myself racing the clock to find a hospital to administer a rabies vaccination, I can’t help but fall in love with each new day and the unexpected prospects it brings.

When I was three years old, I left home for the first time. With only a gray pullover and half a paper bag of cold McDonald’s Happy Meal fries, I slipped out the front door, crept down the front porch steps and headed out into the streetlight-lit world of Kalispell, Montana.

My mom had read me the Little Critter Book, I Was So Mad. The plot changed my worldview. Little Critter is upset at being barred from keeping frogs in the bathtub, so he decides he shall run away. You could do that? My three-year old mind was blown. You could just run away from home and venture out into the waiting world?

Honestly, there wasn’t much to run away from. Other than my dissatisfaction that ice-cream never appeared on the breakfast menu, I lived a charmed life. It would take me decades to learn my desire to travel wasn’t about running away so much as running toward.

On that first solo trip into the world, I made it as far as the curb at the end of my block. At the time, I was forbidden to cross the street without holding someone’s hand. Where the sidewalk ended was where my discoverable world finished. I sat on the curb under the street lights, took out my French fries and contemplated my new life.

I remember this moment as a single image of myself on the curb, surrounded by the soft glow of permeating wonder. This moment was interrupted by my relieved dad, who had been frantically searching for his missing toddler. He scooped me up and carried me back inside our house. That he remembers this too is the only reason I trust such a distant memory.

Tell us a story of running toward something on the road.

In 2008, I took a trip to Cuba as a tribute to my grandma. The week before, I’d had a trip to visit my grandmother. Things did not work out as planned, as I arrived only in time for her funeral.

Cuba had been the connection between us. She had given me a copy of Hemmingway’s The Old Man in the Sea when I was thirteen, and this sparked my obsession with both Cuba and literature (two fires still burning today).

In life, my grandma was a poet who published ten books of poetry. This trip to Cuba was to say goodbye to her, and to bring the most palpable part of her, her poetry, to a place she had always longed to go. With my backpack loaded with ten of her poetry books, I did the opposite of shoplifting and secretly slipped these tomes onto the shelves of ten bookstores in Havana.

How do you pay for your traveling lifestyle?

Mostly through freelance writing. My initial inspiration for writing was to be a fiction writer and supporting myself from novels is still an eventual goal. But along the way, I’ve made inroads into the travel writing world.

4) Procure enough work to pay for your expenses.

It’s easy on paper, but it can take years and decades to actually to get to a point where you are achieving step four. I’m still just barely making it, but every year it gets a little bit easier. I remind myself often that I don’t have any doubts any more, just a lot of work to do.

Do you have another story of running toward something?

After a failed romance on a trip to Iceland, I once again ditched my return ticket back to North America (it’s habit forming, I tell you).

I had $400 to my name and after paying to rent a room with three college students, was broke as broke could be – not to mention still reeling from everything that had brought me there. Plus I wanted to surprise my parents by returning home for Thanksgiving, a holiday I’d missed for seven years.

So I got to work.

I started a band called Loki and the Fashion Bandits and we got into an off-venue gig for the internationally acclaimed Airwaves Music Festival, and made money to live off of gigs.

I made just enough money writing to get to Paris. I stayed with a friend and wrote for a few days until I had enough money to catch a bus to Amsterdam, where a friend I’d met in Guatemala let me couch crash with her for a week. I caught a cheap flight to Barcelona where I got a 10 euro a night hostel bed, and I wrote until I had enough to catch a $400 flight to NYC, where I caught a bus to a plane to a train to a ride from my brother – and I rolled up just in time to surprise my family for Thanksgiving.

In one sense, every day was a struggle, but here I was, out in the world, writing for my room and board, and getting where I wanted to be.

What recent encounter is fresh in your mind?

Marcia Garcia was a disabled woman I met while doing humanitarian work in Antigua, Guatemala. Despite being born into poverty, being bound to her wheelchair, and disabled to the point of not being able to use her hands, she accomplished her lifelong dream of becoming an artist by painting. She painted with her feet and made a living selling her paintings in Antigua’s Central Park.

I became friends with Marcia and her daughter, who was the product of a rape that occurred when Marcia was 19. She came to the school I directed and talked to our youth club of at-risk kids. She told them, “Life is not always easy, but it is always beautiful.”

Marcia knew what it meant to be an artist, and knew that the daily struggle of her life could be translated into something beautiful. She never had a formal education, but I consider her one of my greatest teachers. She taught me about art, life, and most importantly, how to find unbridled beauty in both.

What has surprised when on the road?

I learned that raccoons are not actual mammals. They are bite-sized demons.

One night, in a jungle lodge in Guatemala, I was surprised when a raccoon burst from the jungle and began, as they say, “mauling the s*#$ out of me.” He then disappeared back into the jungle nonchalantly.

I went to fetch and employee to open the kitchen where there was a first aid kit. Before I reached the door, the coon appeared again. He had developed a taste for my blood and he chased me around the dining room, gnawing at my legs like the little hell beast he was.

Finally, I grabbed hold of the low-hanging rafters and beat him off with a chair. By this time enough of a commotion had been made that other guests came out to see why I had been “Squealing like a pig being slaughtered.”

It had all come as a gloriously horrible, but ultimately appreciable surprise: Most of the animals of the jungle desire to bite you.

Window. I like to see the world, not the person across from me.

Buy the equivalent of 1-cent stamps wherever you travel. For less than half a dollar, you can create a really fun postcard image to send to friends. Even if they’re not a philatelist, they’ll still love it.

Don’t propose to someone without taking them on a trip through the developing world.

If they prove able to handle traveling through the difficulties encountered in the developing world, then it’s possible that they might have the patience and wherewithal to put up with you for life.

As I write this, I am in my expat base of Guatemala, where I spend 3-5 months every year. After this, I’ll be in New York for a few weeks for a few music gigs and book signings for my just published book, The Nomad’s Nomad.

Then I am flying one-way to Asia, where I’ll bounce around doing what I do, meeting kindred spirits, finding stories to tell, mountains to hike, beaches to swim, musicians to jam with, and the sort of inspiration that flows when I’m around new people in new places.