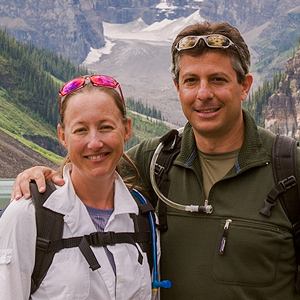 Seeing the world means different things to different people. For Karen Catchpole and Eric Mohl, it means taking a deep dive road trip through the Americas, from top to bottom. After over seven years and 150,000 miles, they still have most of South America to drive through.

Tell us about yourselves.

We’re a traveling couple. Between us we have more than 25 years of travel experience through Asia and Europe, and most of it we’ve done together. In 2006 we quit our jobs, jumped in a slightly overstuffed truck, and hit the road in search of the people, places and things that make every place in the Americas special—a truly independent Pan-American overland adventure from the Arctic to Tierra del Fuego and everything in between.

We call this project the Trans-Americas Journey.

What inspired you to embark on the journey?

The answer is two-fold. When we returned to the US after four years of backpacking around South Asia, we noticed ourselves complaining about travel magazines. They were publishing pieces that seemed to be written by people with little or no first-hand experience of the places or things they were covering.

The second piece was the attacks on September 11, 2001. We’d been about to embark on an extended trip to Africa, but we realized we always traveled far from home. Curiosity about America seeped into our lives as we watched the U.S. give into fear, division and an “us vs them” mentality. So we changed our plans and decided to explore the Americas to better understand our own country and our neighbors.

Do you feel like you’re gaining that better understanding?

Yes, but the best examples of this actually come from comparing this trip to our travels abroad. People living outside the U.S. are often much better at separating acts of government from the citizenry lead by that government. Around the globe we’ve found eyes-wide-open acceptance by people in countries where traveling U.S. citizens should, on paper at least, be reviled.

Everywhere we’ve traveled, the people we talk to have no problem welcoming us personally while having pointed conversations about government policy that confounds or even infuriates them. In Peshawar, Pakistan we were asked by a market vendor who became a friend: “Why doesn’t the U.S. intervene in the Pakistan vs. India conflict in Kashmir but they intervene in Iraq?” We told him because there’s no oil in Kashmir. He absorbed, processed and smiled slyly. Then he hugged us.

This has happened with such regularity that it no longer surprises us—but this type of separation of citizenry and state would be a beneficial skill for anyone to learn when looking at the rest of the world.

Persistence pays off. People really do ultimately want to help you (or at least shut you up). The Arctic doesn’t seem that cold, actually. Polar bears can be mean.

Well, in our truck we both get window seats…

Can you tell us about any interesting people on the road?

In our travels, we encountered healers of all descriptions—including a farmer we paid with a watermelon in Guatemala and a “cell memory reader” in Colombia—as we tried to find someone who could heal an old injury in Karen’s leg.

1. Pack your common sense, curiosity and empathy. Especially that last one.

2. Leave preconceptions at home right next to your jeans. They don’t travel well.

4. Bring a medium size binder clip to hold curtains closed when the ceiling fan (or poor design) forces them open.

5. Pack a flat, round, rubber sink stopper which will plug any sink or bathtub for hand washing unlike the kind of sink stoppers that insert into the drain since they only fit one specific drain size.

6. Never forget how lucky you are to be traveling.

Where are you two headed next?

Our Trans-Americas Journey continues! After nearly 7. 5 years and more than 150,000 miles on the road we’ve only made it as far south as Ecuador. We push on south from here, slowly but surely.

Peru will be next but we’re not in any rush.

Live a Life of Travel, Even with a Full-Time Job: On the Road with Ruby Escalona
© 2023 The Art of Non-Conformity | Site by Bytegrow Technologies