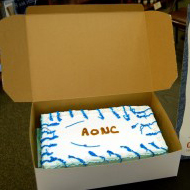 I wrapped up the first part of the Unconventional Book Tour with ten stops in ten days. Now I’m home in Portland for a couple of days before heading back out on the longest leg of the whole trip.

If you’re new to AONC, regular articles are posted on Mondays and Thursdays. I often use Sundays for a weekend update about my business, UnconventionalGuides.com. For the rest of 2010 I’m not doing much business work, so I’ll use this space more often for updates from the book tour.

Here’s where I’ve been over the past week –

In Cambridge, Massachusetts, we started out at the Harvard Coop, where Carolyn Rubenstein introduced me. (She also brought cupcakes and made sure the store wouldn’t put an embargo on them—some people go all out!) Carolyn is a Harvard Ph.D. student in Clinical Psychology, a counselor, an author, a blogger for Huffington Post and Psychology Today, and as if these things weren’t enough, is also getting married to fiancé Ben in a little more than a month. Carolyn is proof of the old saying, “If you want something done right, ask a busy person to do it.”

After the talk, the Q&A, and book signing, I went out to a nearby pub with many of the attendees. During the pub stop I was finally able to catch up with Cal Newport, who writes the great student blog Study Hacks. Cal is another guy who stays busy, with three published books and a Ph.D dissertation from MIT written during the same few years.

Cal has a new book out called How to Be a High School Superstar. I’ve read the whole thing, and the theories Cal outlines are both unconventional and proven. If you know a high school student who is thinking about his or her upcoming college plans, I definitely recommend it.

After the Cambridge stop, I had breakfast the next morning and then drove up to Portland, Maine. Before going on this tour, I had been to 49 of the 50 U.S. states…. but never to Maine. It was fun to cross the state line and say hi to my 50th state, and I couldn’t have asked for a better group.

East Coast Portland (the original one) shares a love of coffee shops and unconventional people with my home in West Coast Portland. I was also educated on “Maine cupcakes,” which are actually called “Whoopie Pies” and became more well known after an appearance on Oprah a few years back. My thanks go to Elisa Doucette and Longfellow Books for putting together my East Coast Portland stop.

The next morning I went for a short run along the waterfront, did a couple of phone interviews for media outlets, and continued my New England drive up to Manchester, New Hampshire.

Like Delaware from last week, I didn’t have a good meetup location confirmed until right before the trip began. In the case of New Hampshire, we had pitched Barnes & Noble on hosting the group, but they never wrote back. Then a lurking reader named Tiffani Frisella came out of delurking mode by deciding to go down to the store and ask them herself.

The first funny thing about this stop was that the store said to Tiffani that I could come, but only on an “unofficial” basis. I figured that meant they would give us a table in the cafe and leave us on our own—so I was surprised when I arrived to see AONC signs on the door outside, and a big stack of AONC books on a table directly inside. Then I looked to the left and saw 25 chairs set up and waiting for us, with more books on the table. I’m not sure what was “unofficial” about the meetup—maybe for an official one they hire a skywriting plane or something.

The second funny thing was when the event manager came over to meet me, she said, “I’m glad you’re here—we really like to support local authors.” Everyone who overheard the conversation started to laugh, and I never got a chance to explain that I wasn’t really local. Then she announced it over the store radio by saying “Come to the gifts section to meet Chris Guillebeau, a local non-conformist author”—and we all laughed again.

Gloria, who had also come out two nights earlier in Cambridge, brought an AONC cake (!) to the event. Jody, another long-term reader, brought homemade cookies. We started with the cookies and finished with the cake—a nice progression. After saying farewell to the group in Manchester, I got back in the car and drove three hours to Vermont for the last stop of the week.

At the University of Vermont we had our smallest group yet, but that’s OK with me—as I’ve been saying at various stops, the point of the book tour isn’t to make money or even to sell a ton of books. The goal is to meet readers and other unconventional people, and they don’t all live in big cities. So in Burlington, we circled up the chairs and talked for an hour about what non-conformity means to each of us.

That night I went out for a celebratory cocktail and did some personal debriefing on how the trip has gone so far. Then in the morning, I returned the rental car I had picked up in Delaware several days prior, and traveled homeward on Continental Airlines via Newark and Houston.

Later this week, I’ll begin the longest part of the tour. It will start in the midwest (Des Moines, Omaha, Lawrence), continue east and south for a bit (St. Louis, Louisville, Bloomington, Cincinnati), followed by the Great Lakes (Ann Arbor, Chicago, Madison, Minneapolis), before ending in the Dakota metropolises of Fargo and Sioux Falls. Almost every stop is back-to-back with lots of driving and a few flights—I’m not sure what I was thinking when planning this leg, but ready or not, that’s how it will work.

Meanwhile, the actual book continues to do well in the marketplace and is finally back in stock at Amazon.com and many local bookstores. The Kindle version is also now available along with the iBooks version that is still outselling the Twilight series… a fact that made me happy until I realized that most iPad owners probably aren’t the biggest fans of Twilight.

If you’ve read the book and enjoyed it, the best thing you can do to help is tell other people about it. Thanks to your help, we were able to put together a fantastic launch—but ultimately the book will be successful as it spreads to other places. I’m truly grateful to be on this journey, and as we’ve been talking about at each stop of the tour, the entire project has been made much better thanks to everyone who participates in some way.

Notes from the Road, Vol. 1

A Business/Charity Experiment from Anchorage

Not Sure of Your Next Career Move? Take a Trip.

THE MONEY TREE Book Launch: Join Me From Your Couch on April 4th!
© 2022 The Art of Non-Conformity | Site by Bytegrow Technologies