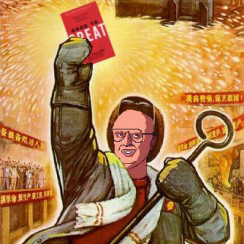 Even if you’re not interested in business, the book is inspiring and practical. Nine years after publication, it’s still kicking ass, and deservedly so.

I recently re-read my favorite passages, and I especially liked the introduction Jim used to convey how much the book meant to him before publication.

As I was finishing this manuscript, I went for a run and an odd question popped into my mind: How much would someone have to pay me not to publish Good to Great?

It was an interesting thought experiment, given that I’d just spent the previous five years working on the research project and writing this book. Not there isn’t some number that might entice me to bury it, but by the time I crossed the hundred-million-dollar threshold, it was time to head back down the trail. Even that much couldn’t convince me to abandon the project.

One hundred million dollars! Can you imagine creating something you love so much that you wouldn’t part with it for less than that? Wow.

Aside from making sure I have enough to live responsibly and have my adventures, I don’t focus a lot on money. But I think Jim’s right: most of us have some kind of walk-away price. It’s good to know what it is, because then you know how valuable your work is—even if it’s something you keep to yourself.

I thought about Jim’s question and tried to apply it to my own world. This year I feel confident in saying I wouldn’t take any less than $2 million dollars to walk away. I’d like to think it was more than that, but I’m not 100% sure. Next year, I hope to say that the hypothetical number is $5 or $10 million—we’ll see.

Understand, I’m not trying to get rich—the real-world, business valuation of my work thus far would be less than any of those numbers. The exercise is to think about the perceived valuation; what it would take for you to hide your work and never show it to anyone.

Most of the time, this is a hypothetical exercise. No one’s going to offer me money to stop writing on ChrisGuillebeau.com – it wouldn’t make sense to belong to anyone else, except for all those other people with the same name… which means pretty much no one.

The point is to keep increasing the perceived valuation of your work.

I feel like I’m making at least a $2 million dollar difference in the world now; Jim Collins felt like his contribution was at least $100 million.

I want to keep improving until one day I can say that I wouldn’t take less than $100 million dollars to stop doing what I do. This sounds like an audacious goal—another topic Jim writes about well.

What’s the price for your work? What would it take for you to quit and walk away?