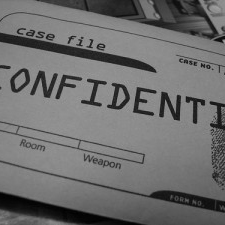 Early this morning I sent out an envelope containing an official Freedom of Information Act Request to the U.S. government.

Am I a conspiracy theorist? Have I started stockpiling canned food and building a bomb shelter behind my apartment?

Sorry to disappoint anyone holed up in a cabin somewhere, but not really. I refuse to visit any bomb shelter that doesn’t provide wifi and a french press. In this case, I’m mostly just curious… what do the feds know about me?

When it comes to legislation, the U.S. government either does things very well or the exact opposite. On the positive side, the Freedom of Information Act (FOIA) that was passed in 1966 has been a good resource to help private citizens gain access to all kinds of information that was previously kept confidential.

The presumption of the FOIA is that information should be declassified unless there is a compelling reason to keep it classified. To gain access to information you’re interested in, all you need to do is file a FOIA request. The appropriate government office then has to either a) provide you with the information in a reasonable period of time, or b) tell you why they won’t give it to you.

FOIA requests are mostly used by journalists and lawyers, but anyone (including foreign nationals) can file one. All of the details are here, but be warned that there are a lot of details.

For the purposes of this article, I’m interested in a little-known government database that monitors the overseas travel of all U.S. citizens. Yes, there is a such a thing. Supposedly, it is strictly automated and not used for malicious reasons, but since few people know about it, most of us aren’t really sure what actually happens with it. (Cue the “Men In Black” music and break out the canned goods.)

Anyway, if you’ve completed any international trips on a U.S. passport in the past decade or so, this database probably has a record of each of them – including how you paid for your trip, which web site you used to make the reservations, and your exact itineraries. Most of the information is probably harmless, but I’m really curious… what do they know about me?

To find out, I filed a FOIA request asking for all the information being kept about me… and if you’re curious, you can do the same.

If you’ve traveled a fair amount on a U.S. passport, you can make the same request I did and find out what information is being saved. Here’s how you do it.

1. Write a letter formally asking for the files.

Your request must be made in writing, dated, and signed by you in ink (no digital signature). Ask to see the “information relating to me in the Automated Targeting System made pursuant to the Freedom of Information Act, as amended (5 U.S.C. 552).” Make sure you include your passport number and mailing address. If you’ve moved recently, include the previous address as well.

2. Send the letter to this address:

It may take up to a year to get the information, and you may be requested to pay a fee of up to $50 if there is difficulty finding your records. I’m not sure that “up to a year” qualifies as a timely response, but hey, I’ll take what I can get.

Why Do I Care?

Since I’m not a conspiracy theorist, I’m mostly interested to see if anything other than the obvious shows up. Among other things, I have dozens, if not hundreds, of short entries and exits related to transit and situations where I had to technically enter a country just before departing. Examples:

Singapore and Hong Kong transit – some budget airlines in Asia don’t have transit desks in the terminal. What this means is that when I’m going between a big carrier (Singapore Airlines, Cathay Pacific, etc.) and a budget carrier, I have to go through immigration on one side, check in at the departures area, and go right back through immigration on the other side. This has happened at least ten times, and each time I get two extra stamps and two more entries on the secret file.

Seoul stopover – my first time in Seoul, I was technically in transit, but since I had never been in Korea before, I wanted to at least go outside. I cleared immigration, walked out and sat on a bench for a while, and then walked back in.

Did that count for a country visit? No, not really – I went back to Korea later for a longer visit, but my philosophy is “never pass up a country when it comes your way,” so that’s why I went outside and came back in. Now that I think about it, I’ve actually done this in several places, so that adds up to more entries and exits that are supposedly in my file.

Frequent U.S. entries and departures – while traveling to Haiti and South America a couple of trips ago, I went in and out of the U.S. 3-4 times in about ten days. Does that look odd? I’m not sure. On the last trip, I went to South America for a week, transited through JFK, stayed a night in New York, then flew to the Middle East. Again, I don’t know if that raises red flags or not – but hopefully I’ll be able to find out with the file.

Sensitive countries – Over the past 18 months, I’ve been to Pakistan, Syria, Russia, Iraq, Lebanon, and Saudi Arabia. Some of these countries, especially Pakistan and Syria, aren’t exactly on the tourist circuit for U.S. visitors. I’ve been asked about them a few times when coming back in to the States, although each interrogation took place months after my visits to those places.

Canada transit – I love Canada, but I don’t love Canadian immigration. Those guys are tough. Every time I go to Vancouver, I prepare myself to answer a dozen questions about my unconventional career and why I would possibly want to visit beautiful British Columbia.

Coming back from Malaysia last month, I flew to L.A., then Vancouver, then Portland – an odd routing that I used mostly due to my travel hacking habit. Very few people transit between two U.S. destinations through Canada, so it threw the immigration guys off more than usual.

On the bright side, I always look forward to a stop at the great Tim Horton’s as soon as immigration is finished with me. Northern friends, I do realize you have the same kinds of encounters going the other way. Sorry about that.

If the U.S. customs service actually comes through and sends me the paperwork, I suspect it will arrive in a thick envelope – and if anyone is actually charged $50 for the time spent compiling the info, I figure it has to be me. I recently received my fourth set of extra visa pages for my main passport, in addition to the duplicate passport I have on hand for sensitive visas.

What comes next? I’m not sure, but naturally I’m curious. Whatever happens, I’ll be sure to let you know.

Update: I received a reply from the government approximately two months after sending the request. Here’s what happened.

Audit Yourself to Improve Your Circumstances

Would You Pay $60 to Sit in a Hot Tub? First Look at the First Class Al Safwa Lounge in Doha, Qatar
© 2023 The Art of Non-Conformity | Site by Bytegrow Technologies