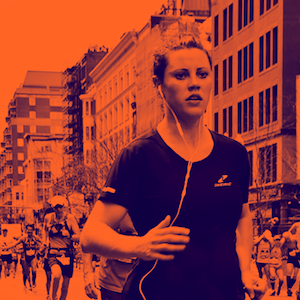 A few years ago I wrote a book about quests. It began as a way to chronicle my journey to every country in the world, then turned into a prescriptive message about “questing” itself. Here’s how I’d sum up the thesis:

Pursuing a “quest” (a big goal with a defined end point) can bring purpose and meaning to our lives. Striving is good for us!

In other words, I wasn’t just documenting a movement, I was trying to put forward an agenda: you need a quest. Since then I’ve heard from people every week who’ve adopted the philosophy or applied it to their own life in some way. (Side note: This is one of my favorite things about being an author. I don’t take the credit, though. More on this at the bottom.*)

In January of this year, I heard from Emily Rudow in Toronto. Emily had just finished running 10k (6.1 miles) every day for 31 consecutive days. I thought that was pretty cool!

But it turns out she was just getting started. Emily is now undertaking a much bigger quest: to set a Guinness World Record by running a half-marathon for more consecutive days than anyone else.

“I searched the Guinness Book of World Records for running records and stumbled upon one that caught my attention right away. Following similar suit to my 10k challenge—the most consecutive days to run a half marathon distance (female). The world record is 60 days and I wanted to beat this! So I decided to apply for the record.”

Emily (in black toward the back) at the 2017 Boston Marathon.

The current women’s record is 60 half-marathons on 60 consecutive days. Because she’s an overachiever, Emily is going for 70. She started last week and will be running, well, every day for the next 60+. I love this!

Starting with a relatively small goal and then raising the bar as you go along is a common characteristic of “questers.” Once you start down this road, you tend to come up with bigger and bigger goals as you go along. You have been warned!

Why is Emily doing this? Because it’s awesome, of course! And because it’s a crazy idea worth attempting. Along the way she’s raising money for cancer research, and also raising awareness for her startup that makes protective hockey clothing for youth athletes.

—
*One of the best things about being an author is when I get to see an intersection between a book I’ve written and someone who applies the ideas. Just about every day I hear from someone who’s used The $100 Startup as a field manual for non-traditional entrepreneurship. To be clear, these accomplishments belong to the people who do the work, not me. If someone starts a business, they’re the ones making it happen.

This case is perhaps even more extreme: Emily is the one who has to run all those half-marathons, day after day. I just fly around the world and manage to pop outside for a grueling 5k jog every couple of days.

“Level Up Your Life” with a Great New Book (Not Mine!)

Ultimate 30 Day Challenge: One Man’s Quest to Eat and Train Like Dwayne “The Rock” Johnson

Live a Remarkable Life in a Conventional World: Nominations Wanted!