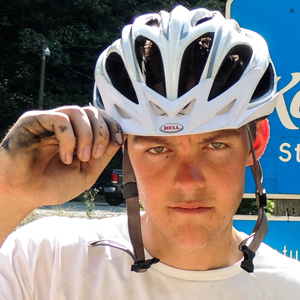 It’s natural to want to give back when someone saves your life. Ethan Maurice thought he was going to be a doctor in order to return the life-saving favor—but then he had another idea.

A brush with death changed my life. At sixteen, I was bitten by the wrong mosquito. I went from being a totally healthy kid to a full on grand mal seizure brought on by a rare viral infection of my brain and spinal fluid. After suffering a stroke, three days in a coma, many more seizures, and nine days in the intensive care unit, I emerged with significant brain damage.

At first, I could barely speak, and my hand-eye coordination was practically non-existent. At my lowest point, my speech therapist held up an apple and asked me what it was… and I couldn’t answer. But after missing half of my junior year, I returned to school. By the time a year had passed, I was teaching myself pre-calculus from a textbook and juggling a double course load to graduate high school with my class.

Once my rehabilitation was close to done, it was like my brain suddenly processed what had happened. I was hit with a brick of a powerful realization. At sixteen, everything almost ended for me. My whole life was almost spent in a passive, wall-flowered existence. My belief that I was guaranteed to live into old age was shattered, and I could no longer justify just going through the motions.

Out of the ashes of near tragedy emerged my personal mantra: someday never comes.

I went to college, determined to study pre-med and help someone the way my doctors had helped me. But then, I became obsessed with the idea of pedaling a bicycle across the United States during my sophomore year. It seemed like the ultimate adventure, crossing an entire continent under one’s own power.

I realized I could raise money for Phoenix Children’s Hospital, in an audacious charitable fundraising venture. Why wait to be a doctor to give back? I’d pedal a bicycle across an entire continent to give back to the hospital that saved my life.

My younger brother and I co-founded Pedaling With Purpose, and after nine months and hundreds of grueling hours preparing (emails, meetings, planning, designing, writing, fundraising events, interviews, appearances on the local news, and an endless list of other tasks), we flew out to Virginia Beach, dipped our tires in the Atlantic, and started pedaling west.

For two and a half months, we pedaled. We traveled over countless mountain passes, through forests, and across deserts. We became masters of stealth camping, setting up late in town parks, or hiding out in pockets of nature yet to be overtaken by suburban sprawl. Trying to summarize the experience and its impact on me is like trying to fit the ocean into a water bottle.

Pedaling day after day, one stroke at a time, was how we got across the country. It’s also how all of us have to approach most worthwhile endeavors in life—with the grit not to move a mountain in one giant push, but one shovel scoop at a time. Often, tremendous accomplishments are the sum of thousands of tiny (yet significant) actions. For us, those tiny actions eventually added up to raising $96,832 for Phoenix Children’s Hospital

Our cross-country bike ride was the comeback story, the life-changing journey, and the best way I knew how to give back to the hospital that saved my life, all rolled into one. Of the many lessons I learned, here are three of the most important ones:

Aim higher than you think you can reach.

Originally, I thought $5,000 was a safe goal for our fundraiser, maybe $10,000 if we really worked hard. However, at the last minute I set our goal at $42,330 ($10 per mile). Incredibly, we raised more than double our $42,330 moon shot for Phoenix Children’s Hospital. This would not have happened if I was “realistic.” Set the bar lower than you can jump and you’ll surely make it, but you’ll never know how high you could have gone.

Don’t quit in the void.

There’s a kind of void you have to cross at the start of most endeavors without results or feedback. We announced Pedaling With Purpose after five months of hard work. We still had no idea what to expect. In that void at the beginning of a project, there’s often such doubt and temptation to move on to something easier—something more measurable.

It’s a dark place to be, but these doubts and fears are a part of the process in the beginning. Gaining traction takes time. I still feel those doubts and fears in the void, but I now know to never give up until I find evidence of whether a project with be a success or not.

One conversation can change your life.

We were camping just off the highway outside of Yellowstone National Park when a backpacker wandered over and set up his tent nearby. A New Zealander, probably in his early thirties, he’d left his job as a professor of mathematics to design anti-piracy security systems for cruise ships and teach city infrastructure in developing areas of India. In the midst of a two-year global walkabout, he’d lived in over 20 countries and just returned from two weeks in the Yellowstone backcountry. It was clear that he was the coolest person I’d ever met.

The conversation turned to my future. I explained that I was going to medical school after my remaining year of undergrad. Stunningly, he flat out told me, “Don’t do it,” and recounted the story of his best friend’s dad, a general practitioner who, on his deathbed, heart-wrenchingly confessed that he’d wasted his life. He’d chose to become a doctor to please others, to be successful, and kept working out of obligation. It was like he could see into my soul: “Why go into such a demanding field if you want to continue this lifestyle and have these incredible experiences?”

I was dumbstruck and made a quick excuse to get back to my tent. I’d been fighting that expectation and sense of entrapment in deep, corrosive, inner war. As every semester passed in college, the walls were closing in further. I knew the doctor in his story was me.

Five minutes later, he came over to profusely apologize. I smiled with a sort of wistfulness and thanked him. As I watched him wander back towards town to meet an old travel buddy, my mind raced. I wasn’t going to medical school. I felt as if I’d been released from a cage. The world was mine to explore and experience. If my dance with death at sixteen had sparked and sustained a single flame, he poured a gallon of lighter fluid on it.

After nearly raising six figures for Phoenix Children’s Hospital, I became intrigued with this idea of adventure fundraising. The summer following my cross country bike ride, I found myself trekking through a snowstorm in shorts atop the highest mountain in the continental United States with my fifteen-year-old sister, who had been diagnosed with type 1 diabetes at age seven.

We’d set out to backpack from Yosemite National Park to the summit of Mount Whitney, a 221-mile trek, to raise money for type 1 diabetes research. As we began our final morning of the 20-day journey, schlepping up the switchbacks of Whitney, snow began to fall.

Determined to reach the summit, we pressed along treacherous, snow-covered ridgelines. With summer gear in a snowstorm at over 14,000ft, the extreme danger of the situation became abundantly clear as we began losing the snow covered trail. After backpacking more than 210 miles to reach that mountaintop, we did the unthinkable: we turned around half a mile from the top.

It was utterly devastating. We cried and shivered our way down the front side of the mountain. It knocked the wind out of us and our fundraiser. We didn’t even raise 5% of our ambitious $221,000 goal for the Juvenile Diabetes Research Foundation (JDRF).

But my sister turned it around.

Two months later, my sister gave the JDRF Fund-A-Cure Speech at their yearly Gala in Phoenix. Rather than avoid it, she made our failure the focus of her speech and the moment we turned around a metaphor for the state of type 1 diabetes research. Her speech was followed with a standing ovation and $276,000 in donations for type 1 diabetes research.

Life is funny. Failing to reach the summit of Mt. Whitney became our most powerful fundraising tool. Nearly dying at sixteen fundamentally bettered my life. Type 1 diabetes turned my sister into a confident, natural leader. Sometimes, the worst things that happen to us can become the best.

Over the past couple years, I’ve found myself in many places. I’ve backpacked the 221-mile John Muir Trail, dissected a human cadaver while earning a bachelor’s degree, worked as a deckhand learning to pilot a fifty passenger cruise ship, and raised over $100,000 for two incredible non-profit organizations. I recently founded a startup company and the blog I’ve been dreaming of for years while living abroad in Playa del Carmen, Mexico. I now often exist in personally uncharted territory with passion, excitement, and purpose.

I want to be able to not just look at a problem from one perspective, but dozens. Where most people can only see an issue from one or two points of view, I think all these travels and roles I’ve lived will allow me to walk a circle of perspectives around any issue I encounter. It’s my hope that I’ll be able to capture some of the biggest ideas and deepest understandings of the human experience.

“If you’re going to spend the money anyway, you might as well get something out of it.”
© 2022 The Art of Non-Conformity | Site by Bytegrow Technologies