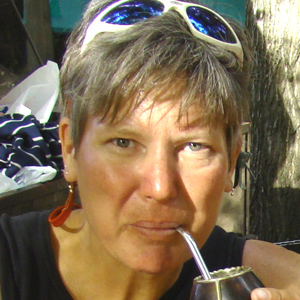 For many, driving 17,000 miles with your family would be challenge enough. Nancy Vogel went a step further, and along with her husband and twin sons, decided to bike from Alaska to Argentina over the course of three years.

Nancy’s perspective on completing a quest was a favorite story for many readers from The Happiness of Pursuit. Here’s more from her.

I am an ordinary mom who went on an extraordinary journey. Some say I was outrageously foolish, others say I was ludicrously dumb. I don’t think I’m either—I’m just a normal mom who wanted a life outside the box.

In 2008, I flew to Alaska with my family. Loaded into the belly of the plane were bicycles for the four of us, and all the gear we needed to begin pedaling toward the southern tip of South America, more than 17,000 miles away. We spent the next three years on our quest for the end of the world and finally—after cycling through 15 countries—we arrived in Ushuaia, Argentina on the island of Tierra del Fuego, where the road ended.

Prior to that bicycle journey, I was a schoolteacher. I taught for 21 years in a variety of countries. Now, we are back in Idaho. Our twin sons are nearly 17, and we’re beginning the college admissions process. The times are changing!

What inspired you to bike from Alaska to Argentina?

I can’t point to any one individual reason. Perhaps the biggest one was that as schoolteachers, my husband and I were spending far more time with other people’s kids than with our own. My husband’s father had recently passed away, which put things into perspective. We realized that time was marching on. Our children were growing up and soon wouldn’t want to spend a few years on bicycles with ol’ Ma & Pa.

But honestly, that doesn’t address the specific question. Why bicycles? Why Alaska to Argentina? I don’t really have a good answer. John and I had previously spent a year biking around Asia and enjoyed it. And the route itself could have been Africa or Asia or Australia or Europe. We chose Latin America because I loved it when I traveled there 22 years earlier, and my husband had never been.

Over the course of 17,000 miles there must have been a low point. Can you tell us about one and how you reacted?

There were two low points, and my reaction to each of them was very different.

The first came as we left the lush green countryside and spectacular experience of Ecuador, entering northern Peru. Soon we were in a stark desert with no water for days on end, interminable winds blowing sand, and horrific drivers. And we all got food poisoning. Except we had to push on—we simply didn’t have enough food and water to take a day off.

By the time we reached Trujillo, Peru’s second-largest city 500 miles from the border, I was mentally, physically, and emotionally exhausted. This journey was no longer fun. It was torture. We had entered into a battle of the Vogel family versus Peru, and I had strong suspicions that Peru would win.

But I was part of a team, and the idea of leaving my team high and dry troubled me. So I made a pact with myself: to push on to Lima, and make my decision there. Putting off that choice made it possible to start to see the beauty of Peru – and once in Lima there was no question I’d continue on.

Fast forward a year to a series of even more difficult moments. It started with my catching pneumonia and continued with a lack of water, dealing with swarms of biting bugs that literally chased us as we biked, with broken spokes on our bikes and dust coating our tongues. My husband sensed I was at a breaking point, and splurged on a hotel for the family rather than trying to camp.

Standing in the shower, I was tired. Tired of rolling up my tent and stuffing my sleeping bag every morning. Tired of foraging for enough food to keep my family fed. Tired of pushing my heavy bike up outrageously steep hills over shockingly bad roads. Tired of being sun-burned and wind-burned and fly-bitten simultaneously.

Yet, I wasn’t ready to give up on our dream. We were so close to Ushuaia I could taste it. I could feel it in my bones. 2,500 miles left to pedal and—one way or another—I was going to make it. Even if I hated every pedal stroke to the end of our trip, I’d get there.

And I think that’s the key to succeeding at a quest: being willing to push on long after the novelty has worn off and you’re functioning on nothing more than grit and resolve. That’s the real test of your commitment to your dream.

How much did your trip cost – and how did you fund it?

Overall, we spent around $2,000/month for our life on the road (so $50 a day) plus $500 for one-offs, like a trip to the Galapagos Islands or to rebuild the bikes. We funded it primarily with rental income from our house. We ended up cashing in our retirement savings while on the road to buy two additional houses, which we also rented out.

Did anything surprise you while on your quest?

I surprised myself. Before we headed out, I wasn’t sure if I had what it takes to do this quest. I always had this idea that people who accomplished big, hard journeys were somehow special—they were hardcore and strong and had some sort of intrinsic drive that us regular folks didn’t have. Boy was I surprised to find out that that’s not the case at all!

As it happened, I had everything I needed to complete our journey. I just had to want it badly enough.

What did you realize while after your quest?

After all my years of travel, I finally realized that while travel had always awakened in me was a sense of wonder and living in the moment, I’ve now come to understand that you can live that way no matter where you are. It’s just a matter of waking up every morning and saying, “What I choose to do with the next 24 hours is what I choose to do. I am not trapped. I am not on the hamster wheel. I am here and I am doing this because it’s what I am choosing to spend my time on.”

What’s next for you?

That is the million dollar question! After our sons head off to college, John and I don’t know – yet.

Keep up to date on Nancy at Family On Bikes, or find her on Twitter @familyonbikes.