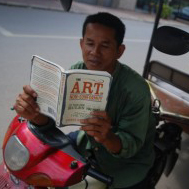 In Phnom Penh, Cambodia I met Mr. Rhet, who held up a copy of my book to greet me at the arrivals area. Mr. Rhet, also known as Rhett or just Ret, is a professional tuk-tuk driver.

The open-air taxis of Southeast Asia, tuk-tuks serve as an interesting introduction to life in the region, and I’ve had both good and bad experiences with them.

Two years ago in Bangladesh, I rode in a death-trap tuk-tuk with a driver determined to provide me with a Formula 1 experience on the road to the Dhaka airport at 11:00 at night. To no avail, I kept yelling “Please slow down!” every time we rounded a corner or ducked in front of a sea of motorcycles. Almost an hour later I arrived at my destination, covered in sweat and shaking with fear. I survived, but aged at least a year in that 50-minute ride.

But in Cambodia last weekend (and plenty of other places), all was well in tuk-tuk land, and I felt safe using them as my primary means of transport. In fact, I enjoyed my time with Mr. Rhet so much that I decided to learn more about the whole tuk-tuk industry.

If tuk-tuks are not available to take you around to cafes in your part of the world for $1-2 a ride, these videos from the back of Rhet’s chariot will give you an idea of what you’re missing.

Informal surveys of expats and other drivers confirmed that most tuk-tuk drivers earn around $2-5 a day. But Mr. Rhet earns up to $50 a day in Phnom Penh, a princely sum in the world of Cambodian transport. How is this possible?

It helps that Rhet speaks some English, although he learned on the job and didn’t have access to any formal training. To understand more, I talked with Rhet off and on for three days as he drove me around the city last weekend. These are the business secrets of maxing out your income as a Cambodian entrepreneur.

Work smarter AND harder. According to Mr. Rhet (and much firsthand observation), the average tuk-tuk driver is lazy. He spends his days sleeping, drinking tea, and playing cards. While it’s nice that the tuk-tuk lifestyle allows for so much leisure time, multiple naps throughout the day are not conducive to getting paid. Rhet works hard, always staying “busy busy” as he explained. He gave me his number and told me to call anytime. “I will come to you right away,” he said.

A good work ethic is critical, but Rhet also learned to focus on foreigners who live in Phnom Penh, not the backpackers and other short-term travelers who come and go. The difference is important, since it allows him to get paid for more trips, and also earn referrals to other expats as his client list grows.

Diversify your income. Mr. Rhet has a banner on the back of his tuk-tuk for a local coffee shop. He is paid $7 a month to display the banner, and a small commission for bringing foreign customers to the shop. (Interestingly, despite the commission he never tried to bring me to the shop. I took this as another good sign, since he wasn’t trying to push me on something I wasn’t interested in.) At the request of other clients, Rhet also arranges trustworthy taxi drivers to ferry passengers on longer distances—for which he also earns commissions.

Provide reassurance. No matter your business, you should think about the reasons why people will NOT hire you or buy what you sell—then be sure to preemptively respond to those concerns. The concerns about riding in a tuk-tuk are a) safety and b) trustworthiness. “I am a careful driver,” Mr. Rhet told me when I first met him, and unlike my death-wish driver in Dhaka, he really was.

Furthermore, some tuk-tuk drivers are dishonest, cheating foreigners who don’t know better and lying about market rates. As you’d expect, Mr. Rhet isn’t like that at all—he sometimes dropped me off without taking any payment at all, and other times told me to decide for myself what to pay. Being trustworthy and reliable goes a long way in Cambodia… just like everywhere else in the world.

Be reliable. If I had an appointment with Rhet, he would always be there—in fact, he was usually early. In almost every developing country in the world, people talk about “Cambodian time,” “African time,” or similar. But Rhet understood that Silk Air flights to Singapore and meetings in town operate on Western time, so I didn’t feel the need to tell him to come any earlier than I really needed. If I told him to come at 4:30, I could walk outside at 4:25 and see him turning the tuk-tuk around the corner to park.

Get to know people and show initiative. Mr. Rhet was very friendly from the beginning. He asked when my return flight was and if he could take me back to the airport. I’m normally hesitant to answer questions like that, but I had a good feeling about Rhet, so I didn’t mind telling him. This ensured he got paid twice for airport runs, a nice wage of $7 each time since the airport is a half-hour out from the city. When we said goodbye, he asked me to tell anyone I knew about his service. (I don’t think he expected me to tell 50,000 people, but perhaps that’s another lesson on where initiative can get you.)

Back to the Airport

As we passed the “King Pizza Burger Bubble Tea Restaurant” and the “Johnny Walker On the Rocks Nightclub” on the way back to the airport, I thought about the divide between people all over the world. Most people spend their time playing cards and drinking tea, while a smaller group of people like Rhet are hustling. Which group are you in?

Then as I left Cambodia, I thought about how I could apply Rhet’s lessons to my own business. I think I’m generally reliable… but how can I be even more reliable? Yes, I get paid from several different sources, but what else could I add? How can I show more initiative and creativity in the projects I’m building?

These “business secrets” may sound very simple—but the point is, most tuk-tuk drivers in Cambodia don’t implement them, so they make $2-5 a day while Rhet earns ten times as much. Not everything that refers to tuk-tuk drivers is universal, but I’m pretty sure that most of us could apply at least one lesson from Rhet to make real improvements in the work we produce.

What about you—how can you use these simple ideas to improve your own business or work?

Feel free to share a response for our community and any other tuk-tuk drivers who happen to be reading AONC.

Oh, and if you’re visiting Phnom Penh and need a reliable driver, you can hire Mr. Rhet yourself by calling +855 12 543 767. (Please don’t call him otherwise, so he can spend his time working and being with his family.)