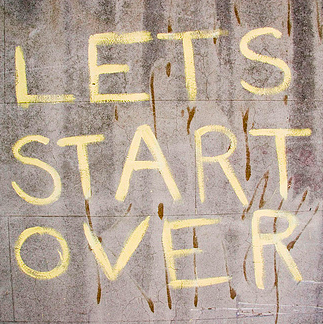 The question comes up a lot: “If you were starting over with this project, what would you do differently?”

In my case, I probably wouldn’t put the domain on chrisguillebeau.com. If you have chrisg.com, that works—but Chris Garrett got to that one first, and for some reason, a lot of people have a hard time with Guillebeau. Oh well.

I would try to have a better understanding of my readers from the beginning, instead of waiting 6-12 months to figure it out. And I would have an agenda and a clear message of what kind of change I was trying to create.

But the more important question is self-reflective: how can you start something?

My advice is to find a few leaders you respect, go back to the very beginning of their project and see what they did as they grew. This is easy to do with blogs and online platforms, even if you don’t care about being a blogger yourself. You will almost always see an evolution as they figure things out and gain their footing. With that in mind, here’s what I’d do if I were starting today.

I would pay $10 for a domain, get a cheap hosting account, and use WordPress for my blog.

I would post on a regular schedule, even if the schedule was only once a week—in other words, I would prefer consistent attempts at creativity to sporadic bouts of genius.

Every day I would ask questions of those around me and try to be helpful.

I would follow back everyone who follows me on Twitter, unless they gave me a reason not to.

I would start a Facebook Page early on and make a big push for it. (Personally I like Twitter better, but I find Facebook “fans” to be more active than the average Twitter user.) However, you also want to be careful – a page with 10 fans doesn’t look so good.

Unless the project was in a tech-heavy industry, I would focus on email instead of RSS, since most regular people have no idea how RSS works, and even the people who use RSS often get behind on reading their feeds. Therefore, I would develop some kind of content that is only sent to my email list, and gently encourage readers to join the email list.

I would then set a goal: every day I want x new readers on the list. I would ignore most other metrics in pursuit of that goal. (According to this theory, traffic that comes and goes is much less important than subscribers who join and stay.)

I would think about monetization (i.e., getting paid) from the beginning. It’s OK to evolve carefully and organically, but you want to have some idea of how you’ll actually make money if that is part of the goal. The best time to introduce paid products or services is after you’ve gained some initial influence but before the project is widely known. Do it too early and you won’t make any money because no one cares. Do it too late and the transition may be awkward, because the community isn’t expecting it.

Mistakes are normal and expected, so I wouldn’t worry about never making them; I would just try not to make the same mistake over and over. In fact, I would tell my community about the mistakes whenever possible, because they like to know what doesn’t work as much as what does work.

I would pursue a lot of different ideas, leveraging the ones that worked and moving on from the ones that didn’t. (Trying to improve your weaknesses instead of capitalizing on strengths is usually a losing battle.)

But mostly, I would focus almost exclusively on two things:

1) Creating something worth talking about

2) Getting the word out to more people

As explained here, some people are good at the craft but not good at the talk. While that may be preferable to the other way around (being good at talking but not about work), it’s better to do both. “Building relationships” is in danger of joining “be authentic” in the category of overused social media advice—but if you can really build relationships and focus on how you are actually helping people, that’s how your project will become successful.

So every day, I would focus on exactly that—creating something worth talking about, and then trying to get the word out wherever I could. Everything else is irrelevant, or at least subservient to those two strategies.

One more note: on book tour I’ve been hearing from a lot of people with ideas for projects. They often wonder: Am I too late? I wish I had done this earlier. Someone else is already doing something similar.

Well, I wish I had started earlier too. I thought the marketplace was saturated and I had no idea if what I wanted to do was actually unique. But despite the uncertainty, I’m glad I finally managed to take a leap. These things have a funny way of growing once you move from thinking to action.

So now the question is … when are you starting? Because it’s not too late.

What’s Your Message? Why Not Share It?
© 2023 The Art of Non-Conformity | Site by Bytegrow Technologies