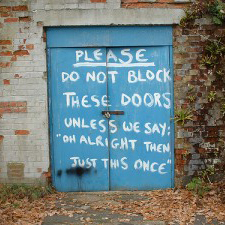 Greetings from Burlington, Vermont. After today, I have a few days home in Portland, Oregon, then I’ll set out to visit the midwest and Great Lakes region starting next week.

In this (very windblown) video update, I talk about social media and why if you’re trying to build a platform, you should talk about yourself more than others.

Stay with me, because this idea is definitely contrarian to the conventional wisdom.

If you can’t watch the video or just prefer to read, here are a few highlights.

Shouldn’t you use social media to promote other people’s work? Isn’t it good to make others look good?

Well, yes, I think it’s generally a good idea to be a nice person. But I don’t think that has much to do with building your brand or platform. If you care about building a platform, it’s far better to actually do something of your own. This usually involves talking about yourself, and that’s OK.

Let’s take the case of someone like @lancearmstrong. I’m a fan of Lance, but he doesn’t know me. That’s OK, I don’t expect Lance to follow me back—and here is the critical point: I also don’t want him to spend all his time promoting other people’s projects and “retweeting” his followers’ notes. I want him to talk about what he’s doing, and I want him to share his own opinions. In other words, I want Lance to talk about himself.

Should you only talk about yourself? No, of course not. It’s good to share other resources, promote other people, and so on from time to time. But ultimately, people will follow you because you are doing something interesting, not because you are good at passing on other people’s messages.

This is why if you want to build something, you have to have your own message. If someone feels like you’re talking too much about your own projects, they can unfollow you. Whenever someone tells me they don’t like what I write or talk about, I always wish them well and say, “Hey, it’s a big internet out there—hopefully something else will resonate with you better.”

But more likely, instead of losing followers or readers, you’ll gain them once you start speaking out more and being yourself. That’s why you need a message!

So … what’s your message?

What are you working on over there, and what’s the next step? You can share it here in the comments for the world to see. As usual, keep the web site in the URL field (not the comment itself), and if you’re doing something interesting, you’ll definitely get your share of visitors.

Most importantly, be yourself! Don’t be shy …