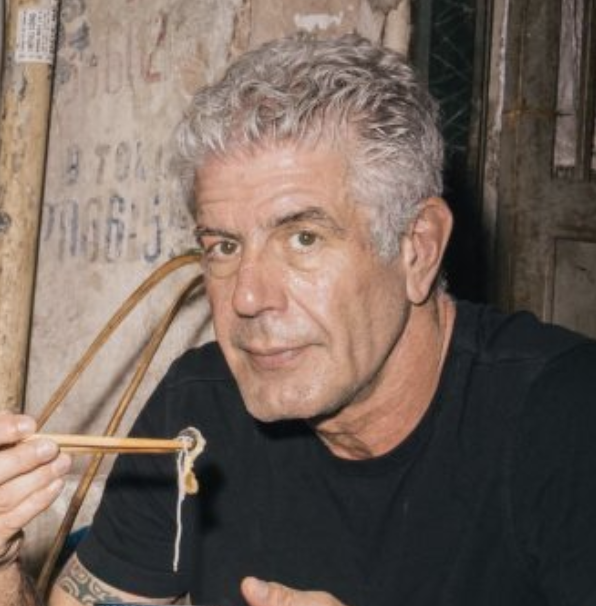 I wasn’t always an Anthony Bourdain fan. My first exposure to him came when I read a critical comment he’d made that didn’t sit right with me. But that was evidently just a passing remark, and I didn’t even know the context, so a couple of years ago I started paying more attention to him. I enjoyed his show whenever I saw it playing in hotel lounges and airports around the world.

Then I read a New Yorker profile that radically shifted my early perspective. I loved it! I remember reading it more than once while traveling in some country or another, no doubt one that he’d been to as well.

I liked the article so much partly because I identified with his style and approach. I recognized parts of myself in how he lived and worked. Not in terms of the level of success, since I am no Bourdain in that department, but in terms of his work ethic and willingness to keep pushing himself over and over.

Some bits that I particularly liked:

Over the past fifteen years, Bourdain has hosted increasingly sophisticated iterations of the same program. Initially, it was called “A Cook’s Tour,” and aired on the Food Network. After shifting to the Travel Channel, it was renamed “Anthony Bourdain: No Reservations,” and it ran for nine seasons before moving to CNN, in 2013. All told, Bourdain has travelled to nearly a hundred countries and has filmed two hundred and forty-eight episodes, each a distinct exploration of the food and culture of a place.

Bourdain’s punctiliousness is a reflection not only of his personality and his culinary training but also of necessity: if he weren’t so structured, he could never stay on top of his proliferating commitments. In addition to producing and starring in “Parts Unknown,” he selects the locations, writes the voice-overs, and works closely with the cinematographers and the music supervisors.

When he is not on camera, he is writing: essays, cookbooks, graphic novels about a homicidal sushi chef, screenplays. Or he is hosting other TV shows, such as “The Taste,” a reality competition that ran for two years on ABC. Last fall, during a hiatus from filming, he launched a fifteen-city standup tour.

Ripert suggested to me that Bourdain may be driven, in part, by a fear of what he might get up to if he ever stopped working. “I’m a guy who needs a lot of projects,” Bourdain acknowledged. “I would probably have been happy as an air-traffic controller.”

Again, I’m no Bourdain, but we connect with people we find relatable. I too am a guy who needs a lot of projects. I too would probably be happy as an air-traffic controller.

Reflecting on this now makes me sad. I’m sure that some will say that his drive, lifestyle, and nonstop schedule contributed to what appears to be a terrible, final choice—but there’s undoubtedly more to it than that. The greater point is that whatever he was fighting got the best of him somehow. And, sadly, whatever meaning he’d found in the frenetic life he’d constructed wasn’t enough.

He had done so much, but who knows what else he could have done? In situations like these, there isn’t much to say except: thank you, Anthony Bourdain, for who you are and what you gave.

And for the rest of us, perhaps a reminder that feels out-of-place yet necessary: there is always a reason to live. It can be normal to struggle, but you are never without hope. Please don’t be ashamed or unwilling to seek whatever help you need.

Why Focus on the Numbers?

The Agenda: Wrap-Up
© 2023 The Art of Non-Conformity | Site by Bytegrow Technologies