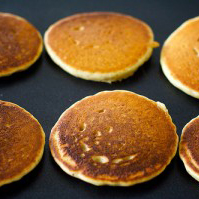 I’ve often recommended the Waffle Window to people visiting Portland. It’s still high on my list, but now I have another recommendation: Slappy Cakes.

At this crazy place, you pay to make your own pancakes on a grill built into your table. I know it sounds weird—pay money to make your own breakfast, then tip the server who brings you the batter—but it works. Check it out the next time you come to World Domination HQ.

Each month once in a while I look back at what’s happened with AONC in the previous month two months. If you’ve missed some articles, you can catch up here.

LIFE – I wrote about An Interview With Yourself, Unsolicited Advice, Your Backup Plan Is Your Plan, Breathing Just a Little and Calling It a Life, and The Quest for 1 Million Photos.

WORK – I wrote about Pavarotti’s Secret for Online Success, Synchronicity and the Building of Empires, Jim Collins and the $100 Million Question, The Eight-Year Escape Plan, and Rest and Recovery.

TRAVEL – I wrote about The Journey (Mary Oliver’s poem), Update on the Journey to Every Country, Thoughts on Risk and 808,185 Frequent Flyer Miles, and The Latest in Travel Hacking.

SITE AND STORE UPDATES – I wrote Win a Free EBK (“monster comments edition”), Extreme Gratitude Austin Edition, Behind the Scenes at the $100 Biz Forum, Happy Easter from Pittsburgh, and several updates for the Empire Building Kit.

POSTCARDS – are up and running. You can see a featured one every Saturday, and many others over here.

Last month I dutifully traveled to Vancouver to begin an expected trip to Belarus and Lithuania. Alas, nature and Lufthansa had other plans. Instead of going to Frankfurt… and then to Minsk… I went to Seattle by bus and to Portland by train. Such is the life of a modern nomad in the days of volcano uncertainty. Take two is coming up in shortly, combined with a trip to Africa.

You can see photos and videos of my trips here. Drop in to take a look if you’re so inclined, and add me as a contact if you’d like.

By far, the biggest business news of the past two months has been the development and first launch of the Empire Building Kit, a comprehensive multimedia product designed to help people build a sustainable lifestyle business in one year by doing one thing every day.

Complete with a trip to Cape Verde (+ Ukraine, etc.), speaking at Carnegie Mellon’s TedX event (I’m still waiting for the video; apparently it takes a long time), my 32nd birthday, and a 44-hour train ride from Chicago to Portland, the launch was truly an epic adventure.

I wanted to tell a fun story and involve people even if they didn’t care about the EBK, and I think it worked pretty well. My favorite part was getting fan mail from readers who said they liked the story as much as they liked hearing about the product itself. Good times. Thanks to all of you for caring.

The launch was for 24 hours only, but it led to more than a month’s worth of work as I had to get busy cranking out the 365-step email series that all EBK’ers get as part of the product, and also prepping for the “no question left behind” webinar that we put on last week.

After keeping the EBK off the market for more than five weeks, I’m almost ready to introduce it once again for those who missed it the first time. This launch will be low-key around here—no train rides or daily updates this time—so that a number of affiliate partners can get most of the attention as they promote it to their own friends and readers.

The launch will be on Tuesday, May 18th for one day only. It’s another 24-hour launch, because afterwards I’m getting on a plane and heading to Africa for a while. After this launch, it will again go off the market for at least another few weeks while I’m overseas.

The overseas trip will take me to Equatorial Guinea and Cameroon, two Central African countries that are fairly difficult to get to. Planning the logistics has been interesting–Cameroon asked for a statement of my financial solvency prior to granting a visa, and someone said on Twitter that I should ask them for the same thing.

After Central Africa, I’ll head back up through Europe for a bit and head home through Asia on Cathay Pacific and American Airlines. The itinerary is currently set as:

From Malabo (Equatorial Guinea) I’ll travel with Ethiopian Airlines over to Doula (Cameroon), and between Minsk (Belarus) and Vilnius (Lithuania), I’ll take the train.

What You Don’t Do Doesn’t Matter

“Everything Is Figureoutable:” Notes from Paris to Doha
© 2023 The Art of Non-Conformity | Site by Bytegrow Technologies