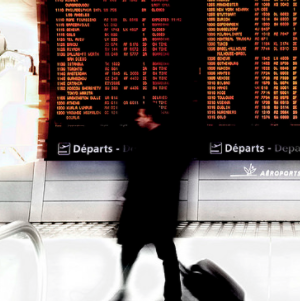 On a recent trip, I had to get back to Doha from Paris, a 5 1/2 hour flight. I was transferring via an initial connection from Zurich, and I booked the Zurich flight to arrive less than an hour before the Qatar Airways flight departed.

You might think that’s cutting it close, and it was. In the worst of times, Charles de Gaulle airport can be an absolute nightmare to navigate for transit. It’s not unreasonable to walk more than a kilometer between terminals, and some terminals are reachable only by an extended bus ride. Add long security lines (no PreCheck!) to that equation, and it’s not unreasonable to allow 2-3 hours for a connection.

But I know what I’m doing, at least once in a while. The only other option was to leave 4 hours earlier, which I didn’t want. The Swissair connection arrived in Terminal 1, the same terminal the Qatar Airways flight was leaving from. I didn’t check any bags, I got my Qatar Airways boarding pass in advance, and I booked a seat in the front of the Economy cabin for my connection (unlike Qatar Airways, intra-Europe Business Class is not usually an experience worth striving for).

The only thing I didn’t count on was my Swissair flight being 35 minutes late for no apparent reason. I did a double-take when I saw it on the departures board at ZRH airport: what, a Swiss flight is late, and weather wasn’t a factor?! Apparently you can’t set your watch by them anymore.

I could explain in detail what happened next, but it’s fairly typical: upon landing in CDG, 40 minutes before my 5 1/2 hour flight was due to take off (boarding had already begun), I bolted from the plane and rushed through the rest of the process—speed walking through a long corridor, clearing immigration, speed walking through another long corridor, clearing security, and finally arriving at the gate as one of the last passengers to board.

I made the flight, as I usually do. Remember: If you never miss a flight, you’re probably getting to the airport too early. There are plenty of airports I love to spend extra hours in, but Paris CDG is not one of them.

As I said, all of that was fairly typical. For me, what was different about this experience was how I felt about the possibility of missing my flight.

It wasn’t a small problem. If I missed it, a lot of stuff would be screwed up. I was flying back to Europe the next day, and the Round-the-World ticket I was on would eventually take me to New York and San Francisco before I went home to Portland on a different ticket. In other words, if I missed this flight, I’d have to arrange not only another flight to London but also three additional ones to get home in the next five days.

Still, it struck me that the stakes in this challenge were pretty low. I know how to book plane tickets! I could easily get to London. I’d have a day to figure out the rest of it. It would cost some money, but not a ton of money (there’s a good reason why I maintain mileage balances with 8 different airlines).

In other words, it would be fine, a mere diversion from a well-planned schedule. As a person who can get stressed about a lot of things (I’m no Bob Marley), I wasn’t stressed at all.

Marie Forleo, a longtime friend, likes to say that “Everything is figureoutable.” What a great phrase. I remembered it as I ran for my flight. I hope I’ll make it, I thought, but if not, life will go on.

I made the flight and settled in with a mimosa made with fresh-squeezed orange juice and my choice of hot or cold towel (I was sweaty from the airport race, so I went with cold). To me, though, the real victory wasn’t that I made the flight. I’ve made flights and missed them. The victory was that I knew I’d be okay if I didn’t. I did what I could to influence the situation, but I let go of the outcome.

You Should Do What Makes You happy