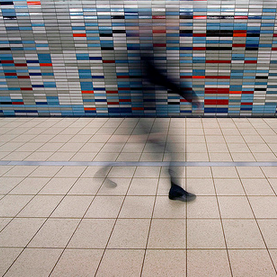 I had an early-early flight, so I booked a hotel near the airport and took the train out the night before. Problem was, I’m so used to going to the airport that I forgot to get off at the hotel stop and instead rode all the way to PDX.

Then I stepped off the train and thought: Whoops. Wrong stop.

It wasn’t a big mistake—I had only gone about fifteen minutes out of my way. But when I got back on the train to return, I realized I had a choice: take a stop that was further away from my hotel, and walk the half-mile in the cold, or wait on the train an extra ten minutes for the more logical stop.

It was a no-brainer: I took the first stop and walked. Reaching the hotel, I was frozen solid, but victorious.

I made this choice and felt victorious (though frozen) because of a lesson I’ve learned: always keep moving. When given a choice between forward motion and remaining in the same place—choose forward motion.

This protocol serves well in both travel and life. When traveling, I hate backtracking. I happily ride in African bush taxis for six hours at a time—but only going one direction. If I have to turn around and go back the other way, I brace myself for an attitude correction. This is probably why I like Round-the-World trips—once I leave home, the only way to get back is to keep moving in the same direction.

In life, moving forward is not always the best choice, but that’s not the point. The point is we don’t always have complete information about the choices available to us. (If we did, there would be little indecision.) Because we don’t have all the information, we need to make the best possible decision, and I think moving forward improves the odds.

Oh, and if forward motion fails you sometimes? That’s OK—just find a different way forward, and don’t make the same mistake. Keep a list of everything you want to do, and work on it every day. MOVE FORWARD.

As Wayne Gretzky said, “You miss 100% of the shots you don’t take.” You might miss some shots when choosing forward motion over waiting it out. But if you don’t take action, you’ll never know.

When in doubt … choose forward motion.

Worst Case Scenario: Losing It All in Europe

Service Is Free to Offer But Incredibly Valuable: Lessons from an Airport Shuttle Driver

“3 Encounters That Changed My Life”: How a Corporate Employee Gained a New Perspective through Travel