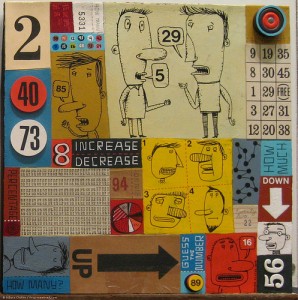 I’ve heard the question in various forms over the past couple of years: Why not just travel around the world without trying to go everywhere—in other words, why focus on the numbers?

My answer is that the numbers give you a goal—something to keep in mind as you go through a challenging process. The numbers can’t be your sole motivation or identity, but they can be a big help.

Pursuing something meaningful and keeping track of it with numbers is fun and addicting. The numbers help to keep things in context. In my business I have goals based on numbers (sales per day, for example). For the blog I have goals based on numbers (new readers joining every day, for example). I don’t do the work for the sake of the numbers, but the numbers provide a good benchmark.

Numbers also make the project more interesting to others. In my case, no one would care if I wanted to visit “as many countries as possible.” Come on. We need a goalpost! 192 is the goalpost—not just “a bunch of countries,” but all of them.

Thomas Hawk has a goal of publishing one million processed photos. Nearly all of them are released to the world under a Creative Commons license, and they’re all good photos too. Why one million? Because it’s an audacious number, which makes it compelling to Thomas and interesting for those of us who are following along.

Sean Aiken worked one job a week for 52 weeks across Canada. Isn’t that interesting? I think so. What if he worked five jobs in a year instead of fifty-two? I’d think: good for him, but not as interesting for the rest of us. When you hear “one job a week for a year,” the story becomes much more engaging.

When times are hard, a goal based on numbers also helps you keep perspective. Is it really worth it to go to random places like Equatorial Guinea? For most people, probably not. But for me, yes—because how could I be satisfied with visiting only 100+ countries?

“Well, that was fun—no need to see the rest!”

I don’t think so. What’s a quest without a challenging objective?

Numbers aren’t everything. But under the right conditions and aligned to to the right vision, they can be a lot of fun. My current number is: 143 down, 49 to go.

And how about you—what do you think about numbers?

Audit Yourself to Improve Your Circumstances