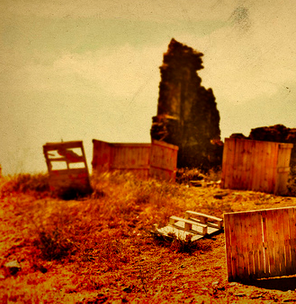 Realistic is the adjective of cynics. Wherever you encounter skeptics, naysayers, and charlatans, you will always encounter this word.

I’m not saying it’s a bad word, that there’s no logic to it, or that it’s completely irrelevant. I’m just saying… who cares whether something is realistic or not? You might as well leave this word to the cynics—let them have it. Let them own it. It won’t do you any good anyway.

Realistic is used to do two things simultaneously: one, to criticize. Two, to justify.

First, the criticism. The message is: Who are you to think you could possibly follow a dream? How silly of you. Underneath this criticism lies the cynic’s justification of his own self-righteousness. To be around someone intent on following a path regardless of whether it is realistic or not can be deeply unsettling. Therefore, the experienced cynic will seek to deploy the shield of realistic to ensure he or she is not further troubled.

Second, the justification. The message is: My way is superior, no one could live like that, we can’t all do what we want all the time, blah blah blah.

But let there be no mistake: language is powerful. The words you use matter, so be deliberate. In one of his many recent TV interviews, someone asked Charlie Sheen if he wasn’t being a bit grandiose. His response:

“Of course I’m grandiose. I have a grandiose life and I’m embracing it. It doesn’t fit into their model, and their model sucks.”

Now, say what you will about Charlie Sheen—but that’s not the point. The point is that you too can live a grandiose life. Hopefully your version of this life involves more than hookers and cocaine, but what he says is true. Their model sucks! You’ll never really fit in.

Look around you at the world. Look at what troubles you. Look at what is not right. You could look at these things and reflect, as many people do: “It is what it is.” This is a popular expression among cynics, along with “Welcome to the Real World.”

Or you could reflect: “Hmmm. What could be done to change this?” Summoning the courage to answer this question is what separates you from the cynics.

How about when you succeed—then what? Alas, in the eyes of cynics, success is a hard sell. They’ll say you’re the exception, or that you didn’t follow the right rules to achieve the success. They’ll find a reason why your success is an outlier, and therefore not applicable to their model. But that’s OK, because their model sucks.

This is why you must not work for the approval of cynics; you must have a higher motivation that is yours alone. You must work for what is noble and right, and for what is true to your own self.

Because you, not being a cynic or a naysayer or a charlatan, have already tipped the odds in your favor simply by daring to believe in something. You’ll get your way in the end, and then people will say… “That’s nice, but it’s just not realistic.”

Then you continue to live your unrealistic, grandiose life.

The Unconventional Strategy in Action

Your Backup Plan Is Your Plan