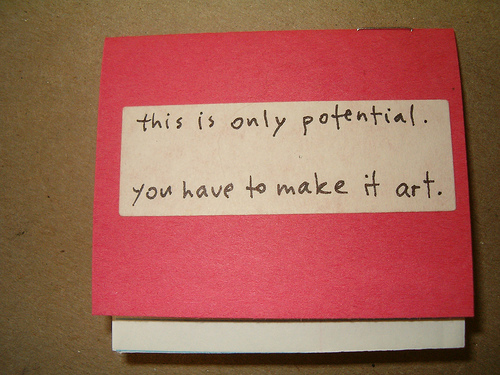 I’ve known a lot of artists, writers, and musicians. Without fail, they all had some degree of talent and skill. There is no shortage of talent in the world. But I’ve noticed that something happens along the way with a lot of these talented people.

With a few notable exceptions, most of them give up on their goals at some point.

As a fellow creative, this really troubles me. Why do talented people stop working on what other people say they are good at?

I don’t have all the answers about this. In fact, it’s something that I’m intensely curious about, and I might take it up as a longer project later.

But for now… I think I know part of the answer. What many talented people lack is the ability to keep going when external rewards are minimal or non-existent.

At the early stages of working on something, hearing that “you have potential” can feel rewarding. But it’s a slippery slope, because the world expects more than just potential. At a certain point, you have to raise the bar and start delivering.

I’ve quoted Paulo Coelho before: “When you want something, the entire universe conspires to make it happen.” This is completely true. But I think it’s also true that when the universe bestows talent on you, you need to start working with all you’ve got to make something lasting of it.

We often hear stories of how some of the most successful artists encounter a series of great rejections prior to finally becoming an “overnight” success. Here are a few of my favorites:

• Jack Kerouac carried his novels with him for seven years before they were published. Seven years!

• Madeleine L’Engle’s A Wrinkle in Time was rejected 25 times.

• The Diary of Anne Frank was sent back with this note: “The girl doesn’t have a special perception or feeling which would lift that book above the ‘curiosity’ level.”

But here’s the grandmaster: Jack Canfield, the guy who started the whole Chicken Soup series. Yes, I know that the business beyond these books has gone far beyond any reasonable branding – see Chicken Soup for the Single Christian Woman or the Teenage Soul series, for example.

The first soup book, before things got crazy, was rejected a total of 140 times. Yes, 140 “no thank you” notes for Chicken Soup for the Soul, which has gone on to sell 40 million copies in at least 20 languages. That guy had more than just potential. He had unbelievable persistence.

Every writer gets rejected, sometimes over and over. But the ones who only have potential stop submitting (or just stop writing) somewhere along the way. They get discouraged and feel beat down.

I’m picking on writers because writing is the art form I’ve chosen, but the lesson extends to any art form. The forced accountability of this project is good for me, because if I were to stop posting one week, you’d know that I’ve slacked off. Then you could say I had potential—the verbal death blow that strikes so many creative types.

But hopefully I’ll have more than just potential, and you will too. You’ll adopt tenacity in place of mere talent, recognizing that talent is helpful but will only take you so far.

In the end, you’re in a room with a notebook, an easel, a computer, or whatever your medium is. You’re probably alone, because that’s what it takes. Are you willing to go beyond the potential that others see?

Giving the “A” Grade for the Person You’ll Become