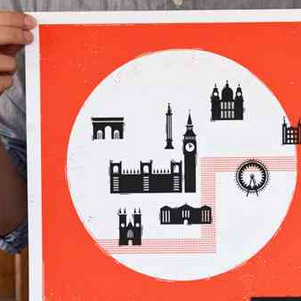 In The $100 Startup I wrote about two young art school graduates from Columbus, Ohio who had built a successful design business.

Their business initially began by chance, when a map they’d made for themselves turned into a hugely popular online product, with orders coming in from all over the world. Very quickly, Jen Adrion and Omar Noory became self-employed. They quit their jobs and decided to see how far they could take their brand-new shop.

I told that story in the book two years ago, but what’s been more interesting to watch is what came next.

Since then, Jen and Omar have proved that they weren’t a one-hit wonder. They made more products… and more people bought them. They started (carefully and cautiously) taking on outside commissions, including work for Southwest Airlines and the Cosmopolitan hotel.

Over time, they built a real business—not just a business opportunity.

What Came Next & Why It Matters

Jen & Omar achieved what many people long for—true creative freedom. It wasn’t about getting rich, it was about building a life oriented around work they loved.

They now operate a six-figure business. Over the holidays they were snowed under with a huge pile of orders, many coming from a partnership with Nordstrom.

Even better, no one can take away their business. With more than 15,000 customers from all over the world, their work isn’t dependent on any single revenue source, and it isn’t dependent on the economy. They’ve built a tremendous asset: strong relationships and a reputation for quality products.

If you have an interest in the arts, pay attention to what they’ve done. It’s truly impressive, and best of all—it’s replicable.

Why Do Many Creative People Struggle?

It’s a common problem: the artist, designer, photographer, or crafter who has incredible talent… but a bank account that doesn’t justify moving into a fancy loft, or even paying the bills.

Talented creatives often end up working for someone else, often at a company or studio. There’s nothing wrong with a j-o-b, of course—if that’s what you want. But if my inbox is any indicator, for every happily employed designer or artist, there are a dozen who desperately long for something different.

The alternative is to go it alone. Put out your shingle! (Or at least, put out your PayPal button. These days, most shingles are virtual.)

Still other times they do great work, but don’t know what to charge for it or how to run the business side of things. The list of challenges goes on and on.

These opposing, equally poor choices—either work for the man in a job you hate, or struggle to get by on your own—represent the sum total of considered options for many talented people.

Are artists destined to starve or struggle? Not really. Some do just fine! Perhaps a better question is: What have the successful people learned—what do they do differently from the others?

Photo: Got a few orders to send out…

There’s a better way than choosing between employment and fumbling. Jen & Omar—and many others—succeeded by following a few simple rules and adapting as they went along.

Over the past six months, when Jen & Omar haven’t been trekking to the post office to ship out thousands of prints, they’ve been working with me on creating a comprehensive toolkit that shows exactly how they’ve created their success.

This toolkit goes beyond anything we’ve built in the past year or two—in fact, the only projects to compare it to are The $100 Startup (three years in the making) and the Empire Building Kit (dozens of interviews and the longest follow-up email series in history).

What Jen & Omar have done rivals these resources in terms of heft and helpfulness. They’ve written hundreds of pages, created a complete pricing spreadsheet (the same one they’ve used to sell hundreds of thousands of dollars in product), and then gone to talk to twenty-one additional experts to get their secrets too. It’s quite the package—but more on that later.

We’ll be launching this resource in just over two weeks, and it’s a big deal. Up to the launch I’ll be sharing stories from their work and lessons from this new project. Right now I just wanted to say… this is coming! And even if you’re not interested in the eventual resource, I hope you can learn something along the way.

I know I’m biased, but I firmly believe that working for yourself is the best option for many of us. Whenever something comes along that helps people get closer to this reality, I get excited.

Oh, and one more thing: if you’re not an artist, designer, crafter, or maker yourself—maybe there’s someone you know who needs to hear about this. Feel free to send them to this post, or just keep watching over the next two weeks.

Question: are you an artist of any kind? Have you ever tried to sell your art?

Let us know in the comments, and stay tuned for more info on Thursday.

*Jen & Omar will also be on site at Pioneer Nation this March. Join us!