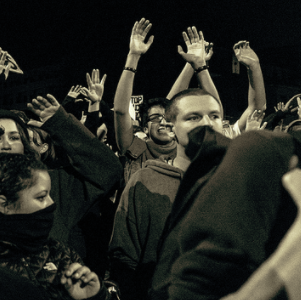 I’m not sure where to begin, or really even what to say at all.

I just wish I had done more to stop it. I’m not very political, I’ve never given to any candidate. I’ve always voted but never registered with a party. I’m not one of those mythical “undecided voters,” but I certainly am independent.

Still, this election was the easiest voting choice I’ve ever made. I know it’s naive, but I was genuinely amazed when I met or heard from people who thought differently.

Okay, so you don’t like Hillary—I’m not sure that was even the point of this election. It was a referendum: America, are you really going to support a transparent and open platform of xenophobia? From a candidate who’s formed a base out of disparaging entire groups of people based on race, religion, and nationality? Who claims the right to commit sexual acts with unwilling participants?

The defense to these things is, “Well, he just misspeaks.” That’s not correct, though—he means what he says. When called on it later, he stands by his rhetoric. Or he’ll say he never said it, when there is a clip of him saying it playing in the background.

This cartoon from the New Yorker sums it up:

I know a lot of it was a protest vote, like Brexit. Here’s the thing, though. You reap what you sow. This election wasn’t stolen, it wasn’t even “rigged.” Almost half of the people who voted willfully selected this man to lead us for four years and represent our country to the world.

Maybe they voted for something they perceived was in their self-interest, but let’s see how that turns out. You think a billionaire who stiffs his employees and doesn’t pay taxes cares about working people?

Imagine a playground bully who picks on the disadvantaged. Then he grows up and becomes far worse. Instead of being shunned, he is elected president of the most powerful country in the world. (A commonly-used description which should now include a disclaimer. Power is one thing, moral authority is another.)

We have entered a reality that is literally unbelievable. Even The Onion is unable to satirize it.

There’s no silver lining, but I will leave you with one challenge. Social movements tend to make a lot of noise about how “We’re going to change the world.” Well, guess what? We’re not doing much of anything. 44% of us didn’t even vote, apparently—so we as a collective group aren’t very reliable.

Still, there’s you. You are the only life you have ownership of. You are self-governing and can use whatever powers you have for good.

Two years from now there will be another chance to mark a ballot, but don’t wait that long. Local issues matter, perhaps now more than ever. Choose something you care about and do everything you can to create the change we need.

Volunteer. Meet people outside of your normal circle of friends. Recruit unconventional allies so that we can defy the stigma of being so divided.

Above all, be kind. Kindness in response to cruelty can have a power of its own.

We’re not going to change the world, but you can.

Let the Wave Crash Over You: One Year Later