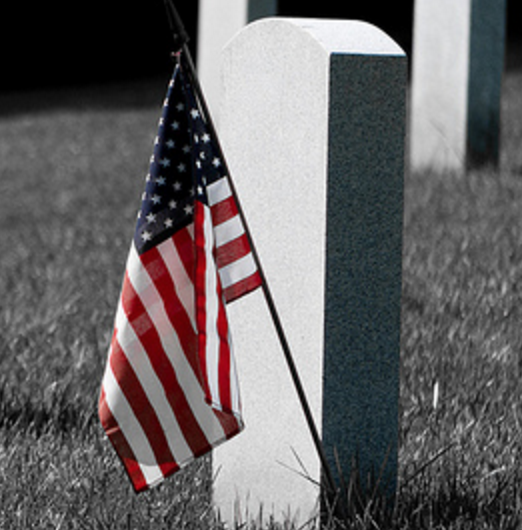 It’s been five months since my brother’s death, and I’ve been back to his former city of Washington, DC several times since then. Until last weekend, though, I hadn’t visited his gravesite.

Quantico National Cemetery is about an hour or so from my usual hotel in Arlington, and once you get off the freeway, the drive isn’t unpleasant. I visited on a Saturday when the offices are closed and there are no services being held, just a few other people coming to say hi to their loved ones.

I arrived on a bright day, thankfully not a very cold one even though it was November, and I parked at the entrance where a computer is set up to help visitors find the location of a specific gravesite.

I’m describing this all very factually, but the truth in that I was terrified. I typed my brother’s name into the computer and felt a shock when it came up. What did I expect? Of course it would come up—and if I didn’t, I wouldn’t have been able to find the gravesite. Still, seeing it there on the screen reinforced a reality that I would sometimes rather pretend didn’t exist.

I received a printout showing the location and got back in the car for a short drive up the road. And that’s when I realized what I was so afraid of: when you visit someone’s grave, there’s no pretending that things are anything but the obvious. There’s no way to run from the fact that someone you love is gone.

I found the right section and started looking around. The printout I received showed his precise spot, but I decided to find it myself once I knew I was in the right area. I wanted to be mindful of the roommates, so to speak—the other people who are also buried there.

This being a military cemetery, everyone laid to rest was a veteran, or in some cases the spouse of a veteran. Searching for Ken felt like a scavenger hunt, and not a very fun one. I paused for a while as another small group of people finished their visit at another gravesite. My intention was to be respectful, of course, but I knew there was another reason as well: I was stalling.

Not knowing exactly where his resting place was gave me something else to discover. But once I found it, I knew, it would never change. Whenever I come back, he’ll always be there.

And that was very hard to accept.

I go through life as a fairly unobservant person, lost in my own world at least 90% of the time. I forget simple directions and get lost nearly everywhere I go. For once, this ineptitude worked in my favor, because I didn’t realize a very simple fact: cemeteries don’t know in advance when their customers will arrive, so the graves are set up by order of death.

Well, duh. Once I figured that out, it was obvious where he’d be. I just had to trace the recent months that his section included, the dates of which were all conveniently included on the gravestones, and then follow them back to June.

It turned out his spot was right in the front, and I smiled at this realization: he’d been upgraded! If anyone deserves Business Class at the cemetery, it’s my brother.

Then I went and sat down beside the gravestone, and I stayed for a very long time.

There’s not much to say about the hour and a half I spent at the gravesite. I sat, I cried, I said some things. I told him that I loved him and that the understatement of 2015 is how sorry I am that he’s gone.

After Ken died, I learned a lot of things about his life that I wasn’t aware of before. One thing that surprised me was his secret love of really bad beverages. Whenever we got together, he always ordered a bourbon or nice microbrew. But somewhere, perhaps on a military training, he had also acquired a taste for Bud Light Lime. I’ve had my share of PBR and other cheap drinks, but I’d never before tried this wonderful concoction that might best be described as the Mountain Dew of beers.

So on the drive out to Quantico, I stopped at a gas station and picked up a six-pack. Here’s another thing I’ve learned recently: before this experience I never understood why people would leave items behind at graves or spend 90 minutes talking with the dead. But once you lose someone you love, these things suddenly make a lot more sense.

I drank my first-ever Bud Light Lime while sitting there, and I left another one behind for Ken. If he wasn’t able to enjoy it after I left, I figured that maybe the groundskeeper could take it home for his own collection.

The hour-long drive to Quantico, where I was filled with apprehension, was hard. Finding his name on the cemetery computer was a shock. Coming to face the gravestone and sit in front of it, with nowhere to hide, felt as though I was walking into a bad movie that I couldn’t escape from and had no conclusion.

I misjudged something, though. After all of that, the hardest thing was at the end. Sitting in front of the grave, strange as it was, I felt like I was at least doing something. But when I walked away, it felt like I was walking away from him—like I was letting him down.

I felt as though I had abandoned him before and now I was doing it all over again. I wanted to stay there forever, or at least buy a timeshare at the Quantico Visitor’s Center and stop by every afternoon to talk about the day.

Mostly I just wanted him back.

There’s no doubt this is a sad story, and I won’t pretend otherwise. I’d like to say one positive thing for anyone who ends up reading this, though. My motivation for doing so comes partly from the fact that I’m still mostly an optimist, albeit a damaged one.

The other part of the motivation is that Ken himself was always very positive. He was the kind of person who would feel bad that other people are feeling bad. Even though everyone who knew him is still moping around, feeling sad and missing him, I know that he wouldn’t want them to feel that way.

In the time since I first wrote about this, I’ve heard from many other people who have experienced a huge loss, sometimes in similar circumstances as Ken’s death and others in different ones.

At some point, someone said something that stuck with me and has provided some comfort. They said that even though I’m feeling a lot of pain, and so are many other people who knew Ken, he himself is no longer feeling any pain at all.

This is important because before he died, he was hurting in ways that none of us understood—and now, perhaps, it’s our turn to hurt. But while I will always wish he had found another solution to the burden he carried, at least he no longer carries that burden. For that, I am glad.

The inscription for Ken’s gravestone reads “Gone but not forgotten.” I’m not ready for him to be gone, but I also know that this part isn’t a choice I can make. The second part, though, is something I can focus on. I can make certain that he will never be forgotten.

So if you, too, have lost someone you love, please know that it’s okay to be sad. It’s even okay to be devastated and heartbroken. Pretending that things are different won’t make it any better and doesn’t do anyone any good.

But if it helps you at all, even a little, do remember that they are no longer in pain. Life is beautiful, but at times it’s also filled with deep sadness—and those who are gone will never again know the deep sadness. They are relieved of whatever burdens they carried in this life.

And as you remember that person you love, it may help to consider the only prescriptive lesson I’ve learned so far in the journey: don’t stop believing in what matters, even when it’s hard. Continue to follow your dreams, even if some adjustments are needed.

Do try to live better, being mindful that you are now representing someone who has moved on, and try to honor their memory as best as you can.

“There’s Nothing You Could Have Done … But What If There Was?”

The Uneventful Days that Affect Us Forever

Running in St. Louis
© 2022 The Art of Non-Conformity | Site by Bytegrow Technologies