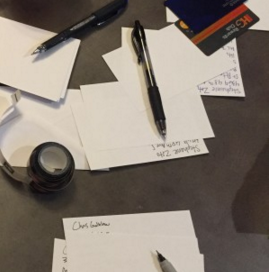 Yesterday afternoon, I headed to Office Depot for an important mission: I had to buy 100 envelopes, stamps, and index cards. I then spent the next several hours diligently writing the same information over and over on each of the cards, before stuffing them in the envelope and affixing a stamp.

It was actually a lot more fun than it sounds.

As detailed last week, if you’re up for your own envelope stuffing adventure, you can receive at least 47,000 IHG hotel points for your time and trouble. These points can then be used for up to 9 free hotel stays anywhere in the world, depending on when and where you book.

A lot of you are attempting this micro-adventure too, and I’ve received a bunch of questions about the details.

First, keep in mind that this is not my promotion. It’s just something I’m doing myself and wanted to share. I don’t receive any benefit from writing about it, and this activity is at your own risk. The worst case scenario is that you won’t earn the points and will have spent your time for no reason. This isn’t an ideal scenario, of course, but it’s also not the end of the world.

With that in mind, here are some Questions and Attempted Answers (Q&AA)!

Because handwriting index cards over and over is so awesome! Well, not really. But I do a lot of weird things like this in exchange for free travel. See the archives and this travel hacking resources page for more info, experiments, and (just as critical) results.

Great question—I was curious about that myself. It turns out that it took me a bit more than three hours from start to finish. I did notice that the time to complete a card without major errors definitely slowed down after the consumption of a single Happy Hour cocktail. At the same time, I’m not sure I’d want to do it without a drink.

If you wanted to go faster, you probably could. And of course, you don’t have to handwrite the full batch of 94 cards. You could write fewer and just receive fewer points.

The promotion’s rules call for you to send in the first six digits of your MasterCard. Presumably there’s not much verification going on, since the first six numbers of many people’s cards is the same.

In this case I recommend the IHG Rewards Club Select card, since you get a 60,000 point signup bonus that will go well with your 47,000 envelope-stuffing points.

And of course, as a general card I always recommend the Chase Sapphire Preferred (especially this month, since it has a higher-than-usual signup bonus).

But you don’t need either of those cards for this. Any MasterCard will work, including a debit card. And while the official answer is “you have to have a MasterCard,” unofficially, it sounds like you just need the first six digits of someone’s MasterCard.

Here’s how the whole process works: after sending in your “contest entries,” at some point you’ll receive an email to enter the contest. You’ll then find out if you won a major prize or just the standard 500 points per entry. I’m counting on the minimum points, so that’s 94 x 500, or 47,000 in total.

You’ll then book award stays from your IHG account in much the same way you’d book a paid stay. Except instead of taking your money, they’ll take your points. That’s it.

We’ll now return to regularly-scheduled programming for everyone who doesn’t care about stuffing envelopes. I’ll post again in 2016 when we see what happens from sending them off!