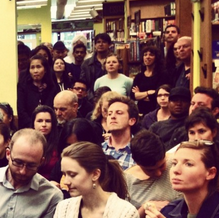 Greetings from Santa Cruz, California—soon heading down to Los Angeles for a book reading party at Vroman’s bookstore tonight.

The past few weeks have been a whirlwind of activity. The $100 Startup launched as an instant New York Times and Wall Street Journal bestseller. We’ve sold 30,000 copies in the first three weeks and plan to reach many more people over the next few months with the message of freedom and value.

On the 24th the book launched in the U.K. and Commonwealth countries. I flew to London for the launch party, which was as fun and amazing as expected.

In fact, I’ve spent almost every day in a different city. In one week I went to Chapel Hill, then to Atlanta, then to Miami, then Houston, then Denver—five days, five cities.

(I’m still on tour for another week in the U.S., and then several cities in Canada after a break. Dates and details are here.)

But enough about me. I’m going to get back to “real posts” soon, but before I do I wanted to welcome all the new readers that have joined us over the past month, and explain a bit more about AONC.

While I’ve been on tour and the book has been racing up the charts, many of you have been coming to AONC for the first time. What’s it all about?

The Art of Non-Conformity is a community of unconventional people doing remarkable things. More than 70,000 people from all over the world subscribe to these bi-weekly missives.

I started the blog four years ago in an attempt to chronicle my journey to every country in the world. I’ve now made it to 185 countries, with only 8 remaining. (Next year we’ll be in Norway for the big finale—feel free to join us for some type of party.)

The central message of AONC is –>

You don’t have to live your life the way other people expect you to. You can do good things for yourself and for other people at the same time.

You can connect with AONC all over the web:

AONC is 100% non-commercial. You can read the blog for free, and I don’t accept donations. As mentioned in Monday’s post, however, we also have several business projects you can check out if you’re so inclined.

Every year we host the World Domination Summit, an annual gathering for creative people. This year’s event sold out six months in advance, but we’ll be hosting a public afterparty for those who weren’t able to get tickets. If you’ll be in Portland, or if you’re coming (people from 25 countries are making the trip), feel free to join us for the closing party or get on the list for next year’s big weekend.

Wherever you’ve come from, I’m glad you made it!

And now, on to Los Angeles… 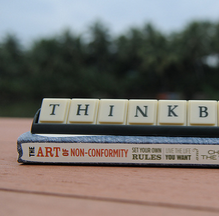 Happy Birthday to the Art of Non-Conformity