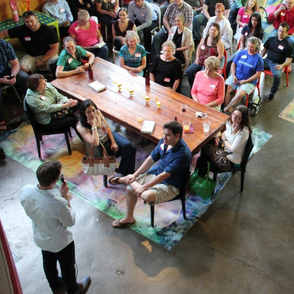 Greetings, friends and readers. I’ve been on the road for 10 days, meeting people in 7 cities and counting so far.

We kicked things off in New York City with a great crowd.

The next day I rode Amtrak up to Boston for a return visit to the Harvard Coop, where I was 18 months ago for The Art of Non-Conformity tour.

After that, I went down to Washington, D.C. and Alexandria, Virginia.

I returned to NYC for the weekend and a shared event at New Work City.

From NYC I went to Chapel Hill, where I met up with my brother for an important bourbon tasting and a fun evening in the Nelson Mandela theater at the University of North Carolina.

The next day I went to Atlanta, where a couple of big surprises were waiting. On the earlier tour, Atlanta was one of my favorite stops. The crowd was extremely enthusiastic and our host, Judi Knight, went above and beyond in putting on a great show.

Among other things, Judi had recruited a brass band (complete with tuba player) to serve as the opening act. After my talk, they resumed playing while I signed books, and finally closed it out with a full-on parade through the signing line. There’s a first time for everything, I said later on Twitter.

Attention LONDON: Friends in the UK and nearby, we’ll be launching the UK/Commonwealth edition of the book next week. I’ll be at Concrete (56 Shoreditch High Street) in central London on Friday, May 25th at 7pm. If you’re in town or able to travel in, I’d love to see you. Sign up here for updates.

Book News: So Far, So Good

Right now the book is in the hands of more than 15,000 people who picked it up during the first week. We’re still compiling the news on a few different sales metrics and records, but so far, so good. The book continues to sell well and earn strong reviews, for which I’m glad.

At some point during the week, I heard from an executive at another publishing house. They saw that we were #1 in organic orders from independent bookstores and wanted to know “how we did it.”

I thought this was funny. How did we do it?

Well, it took approximately four years. I’ve been building AONC the whole time, trying my best to work consistently toward a long-term goal. Then I spent three months working almost exclusively on all things $100 Startup.

I did 47 interviews in April, all in preparation for the launch. I wrote a dozen guest posts and op-eds that went out to the world over the past ten days. I announced and planned the world’s first 7-continent book tour.

But ultimately, I know that my own hustling efforts can only take us so far. The REAL success of the book comes from readers and our community.

On book tour I talk about how many of the people in our group regularly inspire me. If you’re out there and you’ve helped get us this far, THANKS SO MUCH!

I’ll be in Houston tonight, Denver tomorrow, and onwards next week. Wherever you are, keep rocking the universe.

A Two-Minute Book Trailer and The Story of Freedom