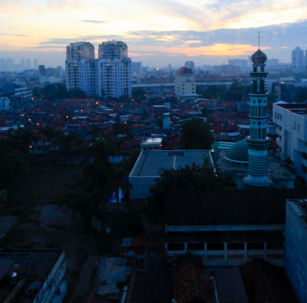 It’s a new day in Jakarta, Indonesia. The sun rises at 2pm—or rather, that’s when I manage to get out of bed. No, it wasn’t a crazy night drinking green tea at the local mosque. It’s just that I arrived at 4:30am this morning, after a 15-hour flight from New York to Hong Kong, followed by five more hours of flying further south.

Thankfully my hotel raised no concerns with the super-early check-in, and I was in bed an hour later. As I closed my eyes the sun was beginning to rise. Earlier today, at least according to the calendar, I watched it set as I landed in Hong Kong after that long transpacific flight. Each time I remembered thinking: is that the sunrise or sunset? Each time required a few seconds of thought before I had the answer.

And so it begins: another week on the road. Aside from changing hotels every night, I’ll be in the same city for most of the week. What shall I discover? What will take place in the venn diagram that highlights the convergence of the outside world and my microscopic part of it? Most important of all, how will I be different at the end of the week?

There was only one way to find out. I had to get outside of my head and outside of the hotel. But first, it was the rise-and-shine early hour of 2pm, and I had to find some breakfast.

How to Buy Plane Tickets on the Same Day of Departure