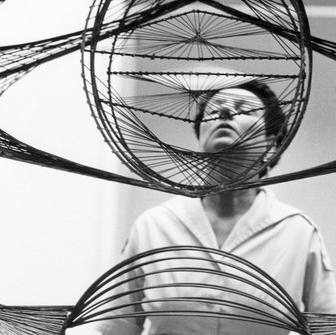 I recently went to see Peggy Guggenheim: Art Addict, a curious film in the sense that it focuses much more on the subject’s love life than it does her love of art. Still, it was good overall and I’m glad I went.

The film showcases the development of several abstract and other non-traditional artists, including Jackson Pollack. I’ve always liked Pollack’s work, but I don’t think I understood the audacity of it until seeing this new film.

The Flame, 1938 by Jackson Pollock

I often feel inspired when I hear about larger-than-life figures who pursued big ambitions. People like Pollack, and Peggy Guggenheim, did big things.

Then I went home and I thought: “What big thing am I doing?”

I’ve done big things in the past. But the past is … the past. It’s not something that can be reclaimed or relived.

In an interview for her biography that was later used for the film, Peggy said:

And I thought that was a pretty good way of thinking about it. What’s done is done, in other words, so you’d better make something of yourself in the days to come. Or at least that’s how I interpreted it.

So what big thing am I doing now, I wondered.

The natural objection is to say that not everything has to be big, which of course is true. But this observation misses the point. First of all, if you can do something big, why wouldn’t you?

Second, “big” doesn’t have to refer only to size. Moving to a tiny house could be a pretty big idea for many people. A lot of small businesses and charities have big impacts on those they serve.

Otherwise, you have to accept that the best was in the past, and that seems depressing. When apathy is the alternative, it’s time to think big.