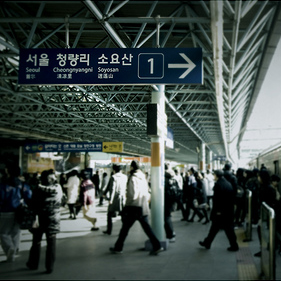 An unexpected thing happened on the streets of Seoul, Korea.

I’ve been to Seoul several times, and don’t really feel anything special about it. It’s not a bad place in any way, and perhaps I’d like it more if I spent more time there. I just don’t think of Seoul in a special way, as I do with other Asian cities like Hong Kong, Singapore, and Bangkok.

That’s why the thing was so unexpected. All of a sudden while riding along in the interminable airport shuttle (the main airport is more than an hour from the city), I began to feel sad. I looked around and realized that even though I didn’t love Seoul itself, in the near future I would greatly miss this experience.

For more than ten years, I’ve been actively traveling in all parts of the world. For the past four years, travel has been a near-obsession. I’ve been in at least 20 countries every year, often more like thirty-five when you consider all the transits and stopovers.

There hasn’t been any time when I haven’t been planning at least one big trip. I’ve had multiple, ten-segment itineraries open at any given time. I’ve spent thousands of dollars in processing fees and FedEx charges sending my passports back and forth from D.C. and various embassies, often receiving them back the day of my departure before rushing out to the airport.

And on this trip, I realized for the very first time … that one day, before too long, it will be coming to an end.

I remember my visit to Sri Lanka, country #100, so clearly. I was jetlagged and made the mistake of taking a nap at 4pm. Waking up before midnight, I spent the rest of the night writing the original Working for Yourself guide and walking on the beach outside my hotel.

It feels so recent, but that visit was actually sixty-eight countries ago. Life has been flying by so quickly.

The quest to visit every country was always personal—I knew I’d do it even if no one cared or noticed. But when I started writing about big adventures (and YOU started reading), things changed a lot, mostly for the better.

At almost every book tour stop, meetup, or speaking gig over the past year, someone asked the question: “What will you do after you finish seeing the world?” Other people would nod, as if they were wondering too.

After a few false starts, I developed a good answer: “Well, I have no plans to stop traveling. I’d like to go back and revisit some of the places I especially liked.”

I also said that travel is only one part of what I do. I write books, start businesses, host the World Domination Summit and other events, and… a lot more. None of those things are coming to an end anytime soon.

These answers—I’ll keep traveling in some form, and I do more than just travel—are both true. But now I understand something that perhaps many of you already knew when you asked the question: the answers were true, but they weren’t sufficient. There is a real sense of loss as a big adventure comes to an end, and I should be prepared for it.

Assuming all goes well, the adventure is coming to an end over the next 16 months. There’s still a long way to go, but I can finally foresee a time when there won’t be any more stressing over visas and hopping off to random countries that I knew nothing about until a few years ago. I probably won’t sleep on many airport floors, and won’t likely maximize a 10-segment itinerary to get to as many stops as possible.

I don’t know what comes next, and the thought of coming to the end feels like a real loss.

An actor friend gave me a metaphor: when a show closes, the actors all experience a feeling of sadness and loss. This is usually true even if they didn’t especially love the show, or even if they’re all ready to move on to something else. You still have to say goodbye to an intense period of your life, and that’s always tough.

So now, after failing to grasp the problem, I suddenly get it. I felt like crying on that airport bus from Seoul, and it wasn’t because I wanted another day in Korea. It was that I’ve been working for something for so long, and now that it actually seems within reach, I don’t know what to do with myself.

Of course I’ll still travel and write after April 7, 2013. I’ll start more projects than I can finish and say yes to things I’m excited about. The best is yet to come. But I do understand… this is a problem I don’t yet know how to solve.

From Seoul I went down to Uzbekistan, a quirky little country in Central Asia. I’ve always been intimidated by the region before, mostly because I didn’t have the greatest experience in Russia. The lingua franca of the region is Russian, a language I know nothing of, and the administrative process in many “stan” countries resembles a Soviet Union that only exists in memory and excessive paperwork.

But this time, I began to see a key difference between a place like Uzbekistan and Russia itself. They are quite different, and I prefer Uzbekistan. I went for an hour-long run and returned back to a breakfast at my guesthouse with a large group of Indian travelers. Several of the people were quite loud and kept shouting to the waiters. “Hot milk! Bring us hot milk! Napkins! Omelette!” The waiters, who didn’t speak English, kept nodding and running back and forth to the kitchen. It was all quite hilarious and reminded me of why I travel.

I could have stayed longer. I would have enjoyed taking a tour to learn more about history and art. Of course, I had to move on after a brief stay, and that’s OK. No regrets. But when my taxi driver deposited me at the Tashkent airport, I motioned to him to stop outside the parking lot so I could walk in.

The driver, who told me had been taking English classes, phoned in to the dispatcher to find out how much the fare should be (another odd, bureaucratic system). He came back and quoted a figure that was a couple bucks more than I had been told to pay at the hotel. I explained what I had been told, and asked if I could pay the lower fare.

“Sir, I not lie you!” the driver told me. He seemed genuinely distressed about my concern, and genuinely honest. I gave him the higher fare, along with a small bit of extra cash that I wouldn’t be needing anywhere but Uzbekistan. Nice guy.

Then I took my time in walking to the terminal, stopping to watch the sunset and the crowded group of people waiting to greet arriving passengers. Another guy approached, offering another taxi but also just wanting to chat. We had a comical, one-sided conversation in English and Russian (guess which side I was) that ended with me flapping my arms to indicate I didn’t need another taxi because I was preparing to fly away. He smiled and waved me off.

Inside, I did the same thing … no rush, no hurry. Soak it all in, I told myself. Don’t forget this time and place. You’ll never be back, so hold on to whatever you can.

On the way home the following week, I got stuck and had to detour for an unexpected three-day stay in Sydney. I ran in the gardens, went on a walking tour, drank Australian pinot noir. It was beautiful and once again reminded me of all the things I loved about travel when I started.

Then I flew home via Melbourne and Los Angeles, and then it was over. Sure, I have five open trips planned—sorting out my visa for Eritrea is the problem of the moment—but all is on track.

Only 25 countries to go. And then what? Only time will tell.