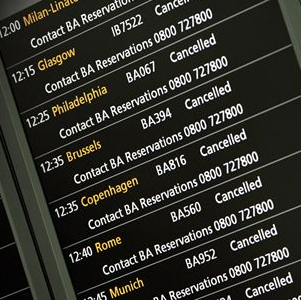 I lived in Seattle from 2006-2008 without a car, which worked well about 80% of the time. The other 20% of the time, I spent a lot of time waiting on street corners for the bus to arrive.

It was frequently late, but once in a while, I’d get to the bus stop right when the bus was pulling up. My friends and I called this “good bus karma” which we ascribed to previous 40-minute waits when we had just missed it.

Having your flight go out on time when 70% of the others are canceled or delayed is “good travel karma”—but just like waiting for the bus in Seattle, sometimes it goes the other way.

Last week I attempted to go to Belarus and Lithuania, and got stuck in Vancouver instead. Now, of all the places in the world to be stuck, Vancouver is a pretty good one. But nevertheless, it wasn’t where I had planned to be, and I had three tickets stacked together that all depended on the Vancouver-Frankfurt flight.

Instead of going to Frankfurt and then further east, I ended up taking the bus down to Seattle and then the train home to Portland the next day. So much for Belarus and Lithuania… we’ll just have to make another attempt shortly.

Let’s talk about travel hacking—strategies and tactics for seeing the world on a budget. From free elite status in Japan to a bunch of new mileage offers, here are a few things I’ve been noticing recently.

Naturally, I wrote about each of these to my Frequent Flyer Master list first. At some point later in the year I may get my act together and create a more active membership site for fellow travel hackers, but as mentioned yesterday, that will probably be a while due to everything else that’s going on. For now it’s all free here, or in a more timely fashion if you have the low-cost guide.

35,000 Points Bonus on AA Citi Cards. Credit cards aren’t for everyone, but after a drought in good new offers, a few have returned. AA has upped the bonus to 30k on its classic “get-10-a-year” cards. Choose from Visa, Mastercard, or AmEx.

The new AA cards offer an additional 5,000 bonus later in the year if you spend enough—that’s a free flight, with either 5,000 or 10,000 miles left over for something else. I got six of these last year at the 25,000 level for a total of 150,000 points. (And before someone asks, my credit score is above the 90th percentile; read this post for the background.)

15,000 AmEx Membership Rewards points. Here’s another new card from American Express—with no annual fee the first year, and can be rolled into another free card with no credit check for the second year and beyond.

2,500 BMI Mile Bonus. The same deal with BMI—join with a new account, start out with a bonus.

Priority Club 1,000 Points Bonus. If you’re staying in a Priority Club hotel, you’ll get extra points with every stay. (The link says it ends April 30th, but it has actually been extended through June.)

U.S. Air 100% Bonus. Last fall our readership earned at least 10 million miles through the infamous “buy stickers, get tons o’ miles” promo. That one is long gone, but U.S. Air reopened the door to a generous 100% bonus when transferring miles between accounts.

Just because it’s US Air doesn’t mean you have to live in the U.S.; it’s open to anyone. You can also earn a 25% bonus for being a US Air elite—another free offer we shared with FFM owners a while back.

Free Silver Elite Status with JAL Hotels. Because you never know when you’ll be in Japan and need a complimentary newspaper. (Right?)

Free 250 Continental Miles. Continental has had a lot of these lately—you look at a web page and earn 250-500 miles each time. Here’s the latest.

And by the way, if you live in the U.S., did you know you can earn 50,000 miles a year by opening two checking accounts? No credit card required. It’s done on a calendar year basis, so you can do it now and then again in January. Here’s the personal one, and here’s the business one.

Little by little, these things add up: see this screenshot of the current balances from my most active accounts. I have another 75,000 or so lying around in some older accounts, and regularly top up the balances whenever they get low. If you don’t live in the U.S. or don’t like credit cards, you can still earn at least 50,000 miles a year without much difficulty, and another 50,000+ if you put some time into it.

Sometimes I find myself wondering whether these things are worth it or not. Then I use the miles to book a First Class Cathay Pacific flight to Asia that retails at $8,000 and I think, oh, yes it is.

I hope at least one or two of these rocks your world today, or at least boosts your mileage account a bit. If so, tell someone about AONC—new readers are welcome anytime.

And if you have a question or tip of your own to share, of course, feel free to do so in the comments section. Now, as to how to get to Belarus…