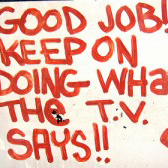 Looking for “Starting With What You Have”? It’s over here.

When people ask for advice about something, I’ve learned to be careful about being too honest. Sometimes I’ll say first:

This is because when we ask for advice, sometimes we’re really looking for affirmation. We want to hear, Yes! I love it! Proceed! Because we’re already married to the idea we want advice on, we’d be disappointed to hear anything less than an enthusiastic endorsement.

And actually, I think this is OK. It’s natural to want to hear positive feedback; it’s good to know that people you trust agree with your plan. But I’d also say that much of the time, we either already know what we need to do about something, or we can figure it out ourselves without something else nodding or shaking their head. If you already know, why ask?

On the other hand, the right kind of advice from the right people can save us from missteps. I have a small advisory team in Portland, whose official role is to help plan next year’s World Domination Summit. I originally said I wanted to do it in March, they said (unanimously) it should be in June. OK, I said—I took their advice and changed the plan. I originally said I wanted 300 people to come, and they said, “Why only 300?”–to which I realized, alright, let’s just open registration later this fall and see what happens.

Those are two examples of very good advice. But I value their advice because I know they believe in the project. If any of them didn’t believe in it, I wouldn’t think less of them, but I also wouldn’t seek out their advice. Why go looking for affirmation from someone who doesn’t believe?

Another thing: if you’ve got your heart set on doing something, it really doesn’t matter whether anyone else thinks it’s a good idea or not. So on those occasions where someone honestly does want my advice and I think the project is a bad idea, I try to make sure I also say that my opinion isn’t the final say. Plenty of people thought the iPod would flop too. So I could be wrong about your idea, and so could anyone else.

Sure, your heart can lead you astray, but at least it will be a more enjoyable ride.

What Would You Do if You Knew You Would Not Fail?
© 2022 The Art of Non-Conformity | Site by Bytegrow Technologies