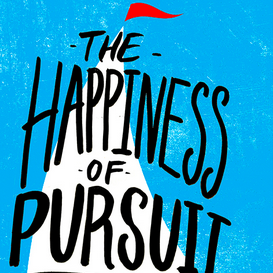 Big news today. I’d like to officially unveil my new book, The Happiness of Pursuit. In this post you can learn more about it, read a FREE excerpt, sign up to help with the launch (if you want…), and get FREE tickets to your choice of 40+ events.

A Long Time Ago

More than twelve years ago, I fell in love with world travel. I loved being out and about, experiencing the world and learning about different cultures.

I didn’t love everything about travel. I often became frustrated with myself and circumstances as I continually became lost or did something stupid. But over time, I realized that this frustration was a key part of embracing travel itself.

I loved the act of going from place to place, as well as the planning process. When I started I knew very little about the world beyond my doors. I’d stay up all night on those first few flights, sipping coffee and studying the route map in the back of the airline magazine. Maybe one day I’d go to some of those places, I thought.

And then I did. In 2008 I formalized the quest and started this blog for thousands of readers at least five family members and close friends, including my grandma who subscribed twice, therefore consisting of 40% of my readership.

I made it to the first 100 countries.

It was almost done.

And then it was done. I’d done it! I’d made it to the end of the world.

By the time I came to the end, I was a very different person. As I learned, this is a common feature of quests. You set out to accomplish something, and hopefully you do—but something else usually happens along the way, too.

It Wasn’t Just Me

Perhaps the greatest revelation of the journey was in learning about quests themselves.

I loved the travel, but I also loved building a structure and a clear goal around it. Knowing that I was working toward something made a huge difference. I enjoyed completing different parts of the world and getting closer and closer toward the end—even though I also didn’t want it to end! (It was sometimes a little complicated, which I wrote about in the book.)

Along the way I met a number of people who were also undertaking quests. Interestingly, while some of them were travel quests, many of the other quests were completely different.

Plus many more! My goal was to tell these stories and extract the lessons. What can we learn from those who pursue a quest—and why should we care?

The central message of the book is that a quest can improve your life. I make this argument through my own story and (thankfully) the stories of many other people who have also undertaken a quest. Using a similar case-study method as The $100 Startup (an international bestseller), I share lessons from the journey and a specific path you can follow in creating a quest of your own—even if you have zero interest in world travel.

On Tuesday, September 9, it will be available to the world, first in the original English edition and then eventually in foreign markets with translations. My previous books are now published in twenty languages, and it’s always fun to hear from readers who first discover the work in a different culture.

Naturally, I’ll be going on the road for my third Unconventional Book Tour.

This isn’t a promotional tour, at least not primarily. It’s a chance for readers to connect with one another (Oh, and we usually have cupcakes.)

If you’re in a North American city and haven’t signed up yet, please do! I’ll be starting in New York City and going to 40 other stops throughout North America.

Check out a free excerpt of the introduction + first chapter below, or over here if you can’t see the embedded file. Spoiler warning: you won’t be able to find out what happened after Guinea Bissau until you read the actual book.

THE HAPPINESS OF PURSUIT by CHRIS GUILLEBEAU

Before a big book comes out, authors and publishers like to encourage readers to pre-order. Why are pre-orders so important? Well, for two reasons. First, they are a sign of confidence that a lot of people want to read the book. Bookstores notice this and order more copies.

When my first book came out, I ran into a big problem: my publisher didn’t print enough copies, and most bookstores didn’t order enough copies. (These problems are related.) We ended up being out of stock on Amazon for several days, which affected the first several weeks of sales figures.

For now, you can pre-order order the book from:

Want to Help? That’s Great Too!

AONC has always been a reader-supported blog and project. We can’t do anything without readers!

Whether you’ve been around for years or are just joining in, thank you. This is the next big adventure and I’m grateful to know you’re out there.

[Update: this form is now closed—but you can still help! Tell your friends about the book—it’s the best thing you can do!]

Thanks again to everyone for being out there. The journey is just beginning, and this chapter looks highly promising.

Will I see you on the road? Let me know!